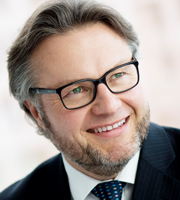 You were leading a brand-name private equity firm and left to become a headhunter. That’s quite a shift.

Yes, at the time all my private equity friends thought I had pretty much lost my marbles. To many, it was tantamount to becoming an estate agent. Four years in, however, and I think the penny has dropped for them that I did know what I was doing and it wasn’t a moment of madness.

What led you to make the change?
Before starting in investment in 1994, I had previously had three careers in six years: software engineer, strategy consultant and television executive. That’s a career change every two years. I think it was the stint as chair of the BVCA [British Private Equity and Venture Capital Associate] that pushed me to lift my nose from the grindstone after 18 years of investing and think maybe it was time to do something different.

What about headhunting, or executive search, appealed to you?
Having gone into investing thinking it was all about spreadsheets, my accounting qualification and my MBA, I came to realise ultimately that it is about backing good people. Assessing and putting together management teams was the element of the job I found the most satisfying. The appeal of doing this all day was tremendous. I had previously been a client of Odgers and the firm stood out to me, primarily because of its culture of teamwork.

Do you have a crowning private equity moment?
It was probably when some of the guards from ArmorGroup, in which we invested back in 2003, rescued some US Marines who were in a sticky situation in Iraq. That was the moment, I think, when the world realised that the reason we backed ArmorGroup was because it was a great company with fantastic people. It was also financially rewarding: we took the turnover from £53 million ($62 million; €62 million) to £102 million in the first year and then listed it on the London Stock Exchange. It ended up being a five-year hold and a 37 percent IRR.

Do you miss anything from the PE world?
No, because I still get to do the good bits: meeting up with management teams and discussing where they want to take their business.

What surprised you about the change — either for better or worse?
I think I underestimated quite how much work goes into building candidate lists. We have 85 researchers here doing that, working their socks off every day.

Do you find it easier or harder to get meetings now?
It’s about the same as before. If you can articulate your value effectively you get the first meeting. If, in the first meeting, you start to demonstrate that value, you’ll get a second meeting.

So what is on your plate?
My time is currently split evenly between private equity and venture capital, and the two markets are in two different places. VC has recently enjoyed huge amounts of capital inflows – something it has not really seen before in Europe. During my time as an investor VC was always the poor relation; suddenly there has been an explosion. There is now a real war for talent in the venture space.

In private equity, the weight of capital has been there for a while: the big challenge is finding transactions to keep existing teams busy. Half of my work relates to portfolio companies; lots of firms are now looking at five-year holds and questioning whether existing management will get them where they need to be, or whether they need to double down and bring in new talent at the top.