Global macroeconomic uncertainty has driven investors towards the 'safe haven' of healthcare as they seek industries which will withstand volatility. 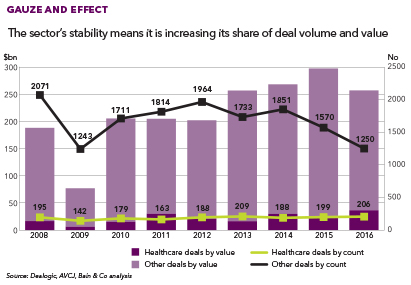 Two mega-deals worth a combined $13.6 billion accounted for more than a third of the value. In May, Hellman & Friedman, Leonard Green & Partners and GIC agreed to acquire healthcare cost management solutions provider MultiPlan in a $7.5 billion deal, and in October Blackstone and co-investors agreed to buy TeamHealth for $6.1 billion. The 10 largest buyouts in the sector accounted for almost 70 percent of total disclosed value.

In its report, Bain notes that the surge in healthcare private equity investing is underpinned by “powerful secular and demographic forces” such as an ageing global population and more discerning clients.

“As a long-term bet, healthcare is hard to beat,” says Franz-Robert Klingan, who leads Bain's EMEA healthcare private equity practice and who co-authored the report.

“The PE funds that make the most of this moment will be those that pick assets that have the best potential to grow, regardless of which direction the economy and other macro trends take.”

Bain found the weighted average valuation multiple for private companies in the healthcare sector in 2016 was around 13 times, two turns higher than the average for publicly listed companies. Firms have sought to take advantage of this disparity through public-to-private transactions. Three of the four largest deals of the year – TeamHealth, Press Ganey and ExamWorks – were take-privates of US companies, the report says.

Firms have also tackled high prices by teaming up, as shown in the MultiPlan transaction, the largest healthcare deal of last year.