It’s official – Blackstone has acquired a minority stake in BC Partners, one of Europe’s oldest private equity firms. Rumours of the deal were first reported here and here. The cash is coming from Blackstone’s Strategic Capital group and would represent as much as a 15 percent stake in the London-headquartered buyout firm, according to the WSJ. Raymond Svider, BC Partners’ chairman, said in a statement the deal allows the firm to progress “to the next level”.

Individual investors remain a comparatively untapped source of capital for alternative investment managers. Singapore-headquartered Xen, an online start-up hoping to provide accredited investors in Asia with access to Western funds, including hedge funds, private equity, real estate and infrastructure, last month appointed Tim Janke (pictured), Blackstone’s first CFO in Asia, to help do just that. We caught up with Janke to discuss Xen’s inner workings, its biggest challenges and what he learned at Blackstone.

Deal activity in Europe dropped to €132.6 billion in the first half of 2019, from €162.3 billion during the same period last year, according to Pitchbook data. This was largely due to ongoing political uncertainty across the continent. The number of deals was also down 14 percent. Four areas are on a growth trajectory: median deal sizes (highest on record in H1 at €27.9 million); take-privates; bolt-on acquisitions and upper mid-market buyouts. Amid Brexit concerns, the UK and Ireland made up more than a third of deal activity. The DACH and Nordic regions, meanwhile, are benefiting from the political unease and taking a larger share of deal value.

TPG taps KKR TPG Capital Asia has appointed David Tan, a former director at KKR, as a managing director in Singapore. Tan will focus on South-East Asia alongside co-managing partner Ganen Sarvananthan. He spent 11 years at KKR in Menlo Park, Hong Kong and Singapore. TPG collected $4.6 billion for its seventh Asia fund in January after two years of fundraising, a rebuild of its management team and with the help of a stapled secondaries transaction.

Montana’s loss, Penn’s gain Joe Cullen will leave as CIO at Montana Board of Investments in September to join Penn State’s Office of Investment Management. We expect Cullen will be examining performance and asset allocation: Penn State missed its 9 percent actuarial return target in the 2018 fiscal year, returning 7.8 percent – lower than most of its public school endowment peers. At Montana, executive director Dan Villa will step in as acting CIO and the board will consider recruitment options at its meeting this month.

Room to grow Expect record fundraising numbers to continue: more than 100 public systems are under-allocated against their private equity targets, sister title Active LPs is reporting. Research from eVestment shows there’s more than $41 billion of potential capital ready to flow into funds. As well as just being a natural part of the commitment cycle as LPs wait for the right opportunities to arise, the gap is widening due to an increase in distributions.

Mellon allocation boost Andrew W. Mellon Foundation boosted its private equity exposure to 44 percent last year from 39 percent in 2017. Below is a look at the $6.5 billion foundation’s historical allocation to the asset class. For more information on the foundation and more than 5,900 other institutions, check out the PEI database. 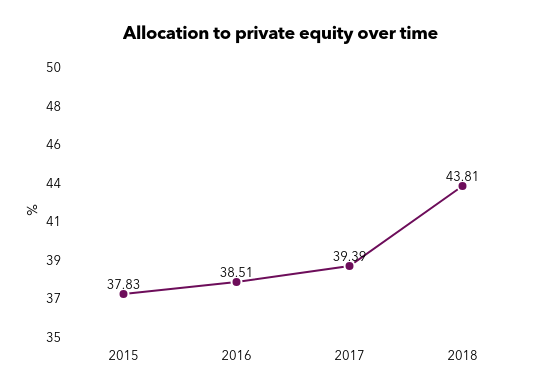 “This acquisition is absolutely not in our national interest …There are real risks in the takeover to UK security and to important hi-tech jobs.”

Nadine Cobham, wife of the former chief executive of aerospace and defence company Cobham, writes to the UK’s Ministry of Defence urging it to block Advent International’s £4 billion ($4.9 billion; €4.4 billion) takeover of the company.