Johannesburg-headquartered Ethos will continue to pursue healthcare assets through its existing flagship funds, chief executive Stuart MacKenzie told PEI. The firm is in market with Ethos Private Equity Fund VII, which has collected 2 billion rand ($144 million; €127 million) out of an 8 billion rand target.

Ethos had been seeking $250 million for Ethos Healthcare and was expected to hold a first close in the second quarter of 2018. It received a 250 million rand commitment from Ethos Capital, the firm’s listed investment trust, in September 2017.

“The healthcare fund is not something we’re prioritising right now,” MacKenzie said.

“We were looking to do a long-term vehicle to build a hospital group and had indicative demand from investors, but it was tough to put the business together at the right price. Valuations were just too high.”

The fund would have targeted healthcare and medical technology companies in South Africa and sub-Saharan Africa. Ethos tapped African healthcare veterans Michael Flemming and Jonathan Lowick to help invest the vehicle, both of whom remain at the firm.

“We’ve been setting up the firm to be able to do this for quite a long period of time in terms of building the capacity and capability, both at an executive level, as well as a funding level,” MacKenzie told PEI last year.

Ethos is not the only private equity firm enticed by African healthcare. Egyptian manager EFG Hermes is seeking $200 million for the 2017-vintage RX Healthcare Fund, which plans to invest in businesses across Egypt, Tunisia and Morocco with a potential for expansion in sub-Saharan healthcare markets, according to its website.

Private equity firms spent $0.9 billion in Africa during H1 2018, compared with $3.9 billion for FY 2017, according to the African Private Equity and Venture Capital Association’s latest data tracker. Just under half of LPs expect returns to exceed 2.5x over the next ten years, according to AVCA’s LP Survey 2018.

Currency risk was identified by 65 percent of LPs as the biggest challenge when investing in Africa, followed by the limited number of established GPs and political risk. The report surveyed 60 LPs globally.

Ethos has raised 600 million rand towards a 1 billion rand target for an artificial intelligence fund that will deploy between 100 million rand and 200 million rand in sub-Saharan businesses that can benefit from digital infrastructure, typically as co-investments with other Ethos funds. The firm has completed 105 deals since 1984, of which 95 have been realised. 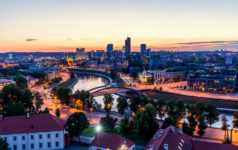