Hamilton Lane has held the final close on its latest dedicated secondaries fund, a week after Private Equity International reported the firm had collected just under $2 billion for the vehicle.

The Pennsylvania-headquartered alternatives asset manager amassed $1.9 billion for Hamilton Lane Secondary Fund IV, according to a statement. The amount is more than double the $909 million it raised in 2013.

“What resonated with our investor base and led to the strong interest in our largest-ever fundraise was our ability to find interesting opportunities with quality GPs and assets, and in turn to deploy that capital, reinvest back into our team and platform and strengthen our position in the market,” Ryan Cooney, product manager of Hamilton Lane’s secondaries platform, said in the statement.

More than 110 new and existing investors from around the world backed the fund, including pension plans, corporate and public pensions, sovereign wealth funds, family offices, endowments and foundations.

LPs that have committed to the fund include Fresno County Employees Retirement Association, Public Employee Retirement System of Idaho and Employees’ Retirement Fund of the City of Dallas, according to PEI data.

In a May interview, Hamilton Lane chief executive Mario Giannini expressed concerns that the amount of leverage being used in secondaries transactions could cause funds focusing on the strategy to lose money.

As growth in the secondaries market only happened during the current cycle, there could be a scenario where a levered secondaries portfolio bought at a premium turns negative for a period of time, he said.

Hamilton Lane has more than $332 billion in assets under management and supervision and employs more than 290 professionals.

The firm is planning to open an office in Sydney, a second European office, as well as a third in China or the Middle East, as PEI reported. 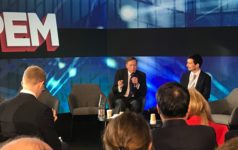 KKR’s Petraeus: We’re facing ‘the most complex array of threats’ since end of Cold War