Deal value fell 27 percent in the first half of this year, compared with the same period in 2015, according to the Boston Consulting Group.

At the same time, transaction multiples remained above historical averages, having reached a median enterprise value to EBITDA ratio of 14x last year. 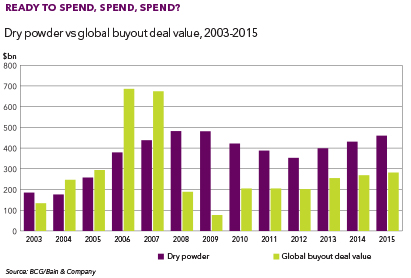 “There have been countless times where we have seen private equity managers get outbid by a strategic [buyer],” he tells PEI. “Given today’s low-growth environment, many of them are looking to buy growth [rather than expand organically].”

Fuelling competition for deals is the record high mountain of dry powder: $479 billion according to Boston Consulting Group.

“Unquestionably that will play a role in the industry and valuations going forward,” Dickie says. “Private equity firms will spend that money, and we certainly see a very active private equity environment today.”

In the current environment, GPs understand that they need to be seen to maintain discipline. Blackstone’s global head of private equity Joseph Baratta recently assured the audience at the Barclays Global Financial Services Conference in New York that the buyout giant had been “highly selective”, maintaining a consistent investment pace of around $1.5 billion for each of the past five quarters.

“GPs continue to be thoughtful about the deals they’re doing,” she says. “Our data demonstrates they have been working within their investment pacing, and as a result, we have not seen a compression in time back to market for their next fundraise.”