I think few people would argue with the notion that last year was brimful of surprises. Unfortunately, not all of them were the most pleasant surprises, and those events dominated the news cycle. Amid all the news flow, one development in the world of private equity seems to have slipped by somewhat unnoticed: European private equity actually exceeded the US in terms of money returned to investors. 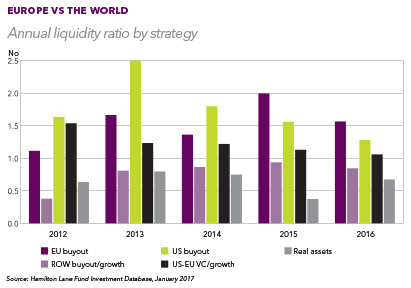 Although recent years have seen a general boom in liquidity for limited partners, last year proved to be noteworthy for Europe in particular, with GPs delivering a meaningful number of exits and dividend re-caps.

In terms of specific liquidity drivers, a combination of factors were at work. Many of the older deals finally recovered from the painful effects of the last financial crisis, and many of the newer deals benefited from being bought post-crisis, and from strong trading in the period since. Additionally, accommodative credit markets allowed GPs with performing or conservatively-financed assets to take some money off the table in a timely fashion via recapitalisations.

The private equity 'circle of life' also played its part. Last year was a major year for fundraising in Europe, and as such, GPs were working hard on liquidity to help demonstrate strong performance and unlock investors' purse strings for the next phase of fundraising activity; a feat which we believe they achieved. The combination of strong liquidity from older funds and the ongoing and increasing appeal of private equity relative to other alternative asset classes also contributed to the strong fundraising environment over the year.

As we move further into the new year, LPs are left with a few things to consider. Is this the last of the liquidity boom? Where will all of the new capital be invested? What kinds of returns are those new deals likely to deliver, especially in the market priced as it is today? All are key questions, so let's take them one by one.

Clearly the pace of liquidity had to moderate at some stage and it seems reasonable that, given the activity over the last year, we believe things may well slow somewhat in 2017. Certainly, it appears that much of the 'catch-up' liquidity from aged deals may now have come and gone. Still, we believe the most likely outcome is a slowdown – nothing more. GPs may be looking to sell into the wave of new capital that has recently entered the market and, for the most part, the economic backdrop may not be precluding the sale of well-positioned assets. So we can expect liquidity to slow, but probably not to stop. 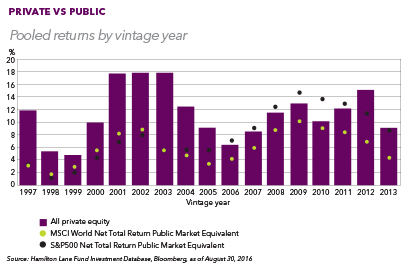 The next question is where all the new capital will be invested. The sanguine view here is that in private equity, there is always 'too much money' but, so far, we believe historical returns have been attractive. It's really the nature of the beast to some extent; the industry raises five-year money annually and so there will be somewhat of an overhang of capital.

In order to feel comfortable, LPs need to see that the size and shape of this overhang align with GPs executing their investment strategies in an orderly manner – which does still seem to be the case. In addition to liquidity levels, another indicator often looked at to gauge a market top is the lack of deals done in any given year. To be clear, a lack of deal completions and a large pool of undrawn commitments do not a happy combination make. What is perhaps a better indicator is the share of private equity deals in broader M&A, which is still well under 25 percent, according to Thomson Reuters' Mergers & Acquisitions Review Full Year 2016. Put another way, instead of looking at how many deals there are, focus on how many there could be – a wholly more comforting way of looking at the challenge.

One thing we expect to remain unchanged in the new year is pricing. We believe it has been high and will likely stay that way in the coming year. The issue for GPs may not be in finding actionable dealflow, but rather in coming to terms with the price of doing business. Steeper pricing forces GPs to think about new deals in a couple of dimensions. The first is to determine what represents the 'point of arrival' for any given business under review. What are we building; how will we get there; how confident are we of the journey and will the prize at the end of the day be worth it?

The pricing environment is causing GPs to be ever more laser-focused on how to build value in the assets that they own and to apply their skills all across the value chain in doing so – and we believe that's a good thing. The other dimension to consider is the 'what's the worst that can happen' scenario. Specifically, what needs to happen for this business to be sold at a multiple considerably less than what it was acquired for? What's the risk of that and how is it underwritten?

So far, that scenario has been a rare one, and mostly seen when GPs lose control of the assets that they own in a restructuring scenario. This means there may be a premium on staying in control and, as we know, while debt levels are fairly high in deals at the moment, the financial structures are still relatively conservative.

Finally, then, to the last question. What about returns? While the market is sure to be a challenging one, we believe that leading GPs will be able to navigate their way through it much as before. Best-in-class firms continually evolve and innovate to stay ahead and, to date, the data suggests that the levels of private equity returns are continuing to maintain a spread over public market returns. Still, the margin for error is shrinking and, as 2017 plays out, it is a factor of which all GPs will need to remain acutely aware.