“First of all, we think this is just the right thing to do.”

Pete Stavros, partner and co-head of Americas private equity at KKR and PEI‘s Game Changer of the Year, tells affiliate title New Private Markets why the firm has granted equity to all employees in some of its portfolio companies. 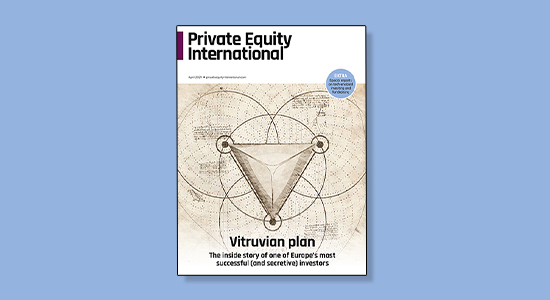 It’s out!
Want to know more about one of Europe’s most successful (and secretive) investors? Or find out more PE regulation coming down the track? The April issue of Private Equity International focuses on the inside story of Vitruvian Partners, a firm with outsized returns and a culture described as “top-quartile demanding”. We also dig into the potential challenges with Australia’s superannuation funds and catch up with a bumper crop of interviewees, including Carlyle Group’s global head of investor relations. Plus: fundraising in 2021 and tech-enabled investing. Here’s the download.

GA on the fundraising trail
Growth giant General Atlantic wants to raise $5 billion for its fourth fund focusing on the strategy, according to Bloomberg (subscription required). The New York-headquartered firm has already raised $3 billion for the vehicle and is aiming for a close in June, Bloomberg reported, citing a person familiar with the fundraise. GA’s raise comes as it seeks to run a $2.5 billion GP-led secondaries process called a “strip sale” that involves transferring exposure to four assets into a continuation vehicle for more time to manage the investments, as affiliate titles Buyouts and Secondaries Investor have reported (registration or subscription required).

Asia co-investments
Attractive valuations, higher growth rates and more favourable risk profiles in Asia-Pacific are the main reasons why investors are drawn to the region compared with the US and Europe, according to Adams Street Partners’ Trends in Asia Co-investments report. Asia was the top geographic focus for LPs, with more than 40 percent of respondents saying the region offered the best private market opportunities in 2021. Co-investments opportunities are rife in Asia with many founder-led companies seeking PE backers, take-privates, carve-outs and more cashflow positive companies, the report found.

PE secrets
There’s still time to register for alternatives consultancy MJ Hudson‘s chat with PEI senior editor Adam Le later today. Up for discussion is how to get better coverage in the private equity press, how the PE industry deals with scandals and what it’s like being a journalist covering the asset class. Details here.

MSA bolsters team with Citigroup hire
Chris Laskowski, former managing director and head of corporate and investment banking Hong Kong at Citigroup, has joined Chinese venture capital firm MSA Capital as its head of capital markets, Side Letter has learned. Laskowski was also head of the global asset managers group in Asia-Pacific, according to his LinkedIn profile. He will advise on M&A, private sales and alternative paths to liquidity such as direct listings at MSA, as well as cross-border growth, according to a source with knowledge of the matter. The firm, which hired Eaton Partners’ former head of Asia-Pacific Chris Lerner as managing partner in October, has had eight IPOs in past two years and is raising its debut Emerging Technology Markets Fund, as previously reported.

Today’s letter was prepared by Adam Le with Rod James and Carmela Mendoza.