Paris-headquartered Eurazeo is the latest firm to use the secondaries market to give its fundraising a boost. The firm moved a strip of five assets off its balance sheet into a vehicle backed by Lexington Partners and others. The assets were then used to seed mid-market-focused Eurazeo Capital IV, which held final close on €700 million in July. The syndicate also made a stapled commitment to the fund. Expect to see more such deals this year – strip sales accounted for 34 percent of GP-led transactions by value last year, more than restructurings or tender offers, according to Campbell Lutyens.

Speaking of secondaries, Brookfield has become the latest asset manager to eye an entry into the buyside of this market, sister title Buyouts is reporting. The Canadian giant recently explored buying a secondaries firm and approached at least one manager which was ultimately not interested in selling. It’s surprising that more large asset managers haven’t already added secondaries to their capabilities. Of the 10 largest firms according to the PEI 300, only Blackstone, Carlyle and Neuberger Berman have secondaries businesses. For a market that’s grown seven-fold over the last decade, you’d expect more managers to be keen to get a slice of the pie. Thoughts on this? Let us know.

Arizona Public Safety Personnel Retirement System is overhauling its private markets portfolio, combining private equity, real estate and real assets into a single alternative assets pool and cutting down its manager relationships. CIO Mark Steed (pictured) describes the process of trimming the portfolio as a “cold, clinical review” of who the pension system considers is adding value and is a good partner. One of the drivers behind the cull: decade-long growth across the board resulting in “the type of wealth and hubris that creates conflicts of interest and economic misalignment between parties”, according to Arizona documents.

Platinum gets green light. Pennsylvania Public School Employees’ Retirement System board has voted to approve a $300 million commitment to Platinum Equity Capital Partners Fund V after previously postponing the vote over ESG concerns. Platinum partner Mark Barnhill explained to the board the firm’s investment in Securus, which manages inmate phone systems for multiple state prison systems, including the Pennsylvania Department of Corrections. “PSERS’ board felt that our advisory seat [on Platinum’s advisory board] could give us the ability to influence the direction of Platinum and the companies that could become part of the new fund,” a PSERS spokesman told us.

More Abraaj courtroom drama. Last week a UAE court sentenced Abraaj founder and CEO Arif Naqvi to three years in prison in absentia for siphoning off money from airline Air Arabia, according to several media reports. Naqvi was on the airline’s board and allegedly used the money to cover shortfalls in one of Abraaj’s funds. Consequently, Air Arabia posted a full-year loss after booking impairments to cover its $336 million exposure to Abraaj.

It’s unclear whether Navqi, who is under house arrest in London awaiting his February extradition trial to the US, will serve the sentence. It comes a week after Dubai Financial Services Authority fined two Abraaj group companies a total of $315 million for deceiving investors and the regulator.

Lonestar state ups allocations. Teacher Retirement System of Texas has voted to change its strategic asset allocation framework, which includes increasing its target allocation for private equity from 13.0 percent to 14.0 percent. Here’s a breakdown of the $145.9 billion pension’s total investment portfolio. For more information on TRS, as well as more than 5,900 other institutions, check out the PEI database. 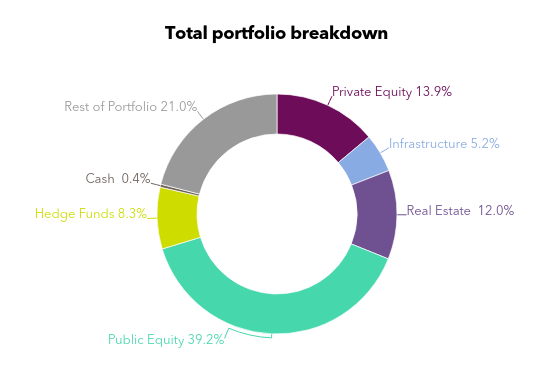 “Predatory and destructive activity like looting assets, hiding fees and strategically using bankruptcy without regard for the well-being of workers is perfectly legal.”

Michael Frerichs and Joe Torsella, Illinois and Pennsylvania’s respective state treasurers, argue that private equity is dangerously under-regulated in an op-ed on Sunday.