Pritzker Private Capital, which started as the mid-market investment office for JB and Tony Pritzker, scions of the family that founded the Hyatt Hotel chain, has not been afraid to evolve with market conditions. Last year, it separated from Pritzker Group Private Capital and raised a capital pool with select other families. This year, it expanded its remit to take minority positions in companies looking for capital and partners but are “unsure about what they want”. PPC president Paul Carbone talks us through how the group invests.

There’s a giant deal moving through the secondaries market. Crestview Partners, which was formed in 2003 by two Goldman Sachs execs, is running a stapled tender offer on two of its prior funds, sister title Secondaries Investor is reporting. If even half of the roughly $4.6 billion in net asset value up for grabs ends up trading, it could mark one of the largest such deals of its kind. Crestview wants buyers to also make a primary commitment to its Fund IV, which launched in May last year with a $3.5 billion target.

Managers with more to lose

If LPs want their PE fund managers to select safer assets, they should consider requiring them to put more skin in the game. Research from Norway School of Economics and Goethe University Frankfurt found GPs select less risky assets the greater their ownership in a fund. The study used a sample of 120 PE professionals in Norway, where taxable wealth is public, and looked at 62 transactions from 2000-10. The research also found those with more skin in the game pile more debt on portfolio companies – perhaps because these safer businesses have a greater capacity for leverage. More on this to come.

KKR impact fund. KKR has thus far gathered more than $1 billion for its Global Impact Fund, launched early last year. We caught up with impact co-head Ken Mehlman on the firm’s playbook for the fund, the sectors its looking to target, its ideal deal size, and how it plans to measure impact.

How does your salary stack up? Sister title Private Funds CFO is teaming up with MM&K on its annual PE and VC Compensation Survey this year and we’re looking for submissions. Now in its 20th year, it analyses compensation levels for 37 different industry-specific job functions. It looks at headcount, revenues, management fees, carried interest plans and participation therein, as well as GP commitment levels. Participants receive a free summary of the findings and a discount on the full report, which will be available at the end of September to help firms with year-end salary and bonus reviews. If your firm is interested in participating, please contact Nigel Mills at MM&K.

Working in private equity can be stressful, we know. Fortunately some industry professionals are balancing things out by moonlighting as stand-up comedians. Like Houlihan Lokey‘s Tad Flynn, who performed at Comedians in Exile in Westerly, Rhode Island, last Saturday night. Who said PE doesn’t have a sense of humour?

Capital, ventured. CTBC Venture Capital has agreed to commit £3.6 million ($4.3 million; €3.9 million) to LocalGlobe’s Latitude fund. Here are some recent private equity commitments made by the Taiwanese insurer. For more information on CTBC, as well as more than 5,900 other institutions, check out the PEI database. 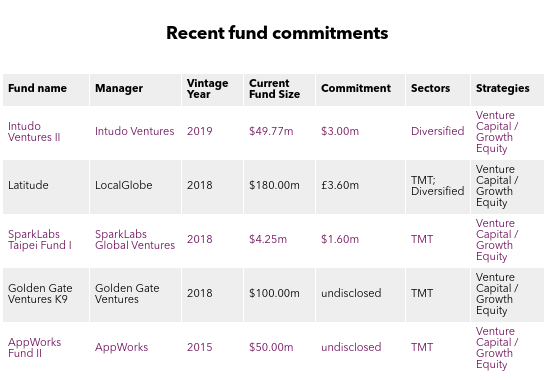 “Some of our investment professionals have had flights grounded this week and we’re busy preparing business continuity plans for our HK portfolio. We’re looking at options for moving production elsewhere to ensure products are shipped on time if necessary.”

An executive at a pan-Asian private equity firm tells us how they have been impacted by the ongoing protests in Hong Kong.