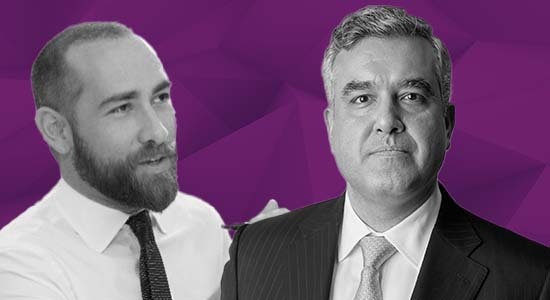 Petershill earnings
Petershill Partners, the London-listed GP stakes entity operated by Goldman Sachs Asset Management, published its maiden full-year earnings results this morning. We caught up with co-chairs Robert Hamilton Kelly and Ali Raissi-Dehkordy (pictured right) to discuss the firm’s plans for geographic diversification, coverage of which you can read here. (Spoiler alert: Asia-Pacific could be its next destination). Below are some highlights from its earnings:

EQT’s hard-cap
EQT has set the hard-cap of its 10th flagship buyout fund at €21.5 billion, per a Tuesday statement. That figure is €6.5 billion more than the hard-cap of its predecessor fund, which closed on €15.6 billion last April. Fundraising began in January and will likely be materially done in 2022, per the firm’s 2021 year-end report in January. Chief executive Christian Sinding said at the time that a first close is expected in the first half of the year, and a final close in 2023.

There are at least five other firms each looking to raise upwards of $20 billion for their latest vehicles, including Carlyle, Thoma Bravo and Advent International, PEI data shows. Vista Equity Partners is seeking up to $24 billion for its eighth vehicle, The Wall Street Journal reported. Blackstone, which raised the largest fund in PE history with its $26 billion Blackstone Capital Partners VIII in 2019, could seek as much as $30 billion this year for its successor, according to Bloomberg.

African records
African PE and VC fundraising reached a record $4.4 billion in 2021, a 63 percent increase from the $2.7 billion annual fundraising average for the preceding five years, according to African Private Equity and Venture Capital Association’s 2021 African Private Capital Activity Report. Infrastructure and growth capital-focused funds absorbed 45 percent and 36 percent of capital raised respectively. Sector specific funds including renewable energy, tech and agribusiness, meanwhile, made up nearly 60 percent of total fundraising value. An additional $2.3 billion of interim closes were disclosed during the period, 40 percent of which went to infrastructure funds.

Sequoia’s scrutiny
Sequoia India has pledged to set a higher bar for governance in response to scandals involving portfolio companies in Southeast Asia and India. In a blog post this month, the firm acknowledged that some of its portfolio founders have been under investigation for potential fraudulent practices or poor governance. As a result, Sequoia India pledged to introduce governance trainings for founders and senior management; implement whistleblower policies; introduce more independent board representation; and ask for more disclosures and more rigorous adoption of internal audits and controls.

“It is easy to think of this issue as ascribed to poor due diligence,” the firm said. “But let’s remember that when investments are made at seed or early stage there is hardly a business to diligence. Even later stage investors can face negative surprises, post investment, if there is wilful fraud and intent.”

Los Angeles County Employees’ Retirement Association has approved a total of $750 million in commitments across seven private equity vehicles, according to the pension’s April investment board meeting document.

The US public pension fund is underallocated to private equity, with 15.2 percent of its portfolio exposed to the asset class, below its 17 percent target.