“We are looking to get the best ideas and expertise from the private sector to come in and shape what is going to be new regulations, new formats around reporting, risk management, reporting returns…”

Join us!
Today we kick off our virtual CFOs & COOs Forum Europe. For the next two days industry leaders will be getting into the weeds of everything from valuations to ESG. Find out more here, join us last minute and catch up on anything you miss! 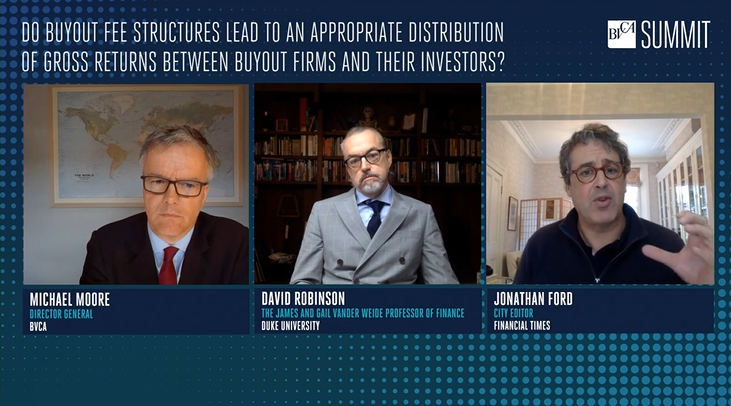 Do buyout fee structures lead to an appropriate distribution of gross returns between buyout firms and their investors? This was the topic of a panel discussion between private equity naysayer and Financial Times journalist Jonathan Ford and Duke University professor of finance David Robinson last week at the BVCA’s virtual summit. You’ve heard the arguments in the negative before: PE returns over the last decade have not outperformed public markets enough to warrant their fees; GPs need to put more skin in the game to ensure better alignment with investors; management fees should be enough to cover a PE firm’s operations, nothing more. Robinson’s counterarguments ran as follows:

Coming to a conclusion on this topic within a 20-minute debate is nigh on impossible, as the debate showed. What Ford and Robinson did see eye to eye on was the need for greater transparency and alignment in the industry, such as on more skin in the game. “That would naturally inoculate the industry against many of the problems that seem to creep up ex-post,” Robinson said. “I’m very sympathetic to that.”

Asia-based placement agents seem to be moving in-house with increasing frequency during the pandemic. Chris Lerner, former head of Asia and a Shanghai-based global partner at Eaton Partners, left in August to join an unnamed Chinese GP.  Jackson Chan, a managing director at Eaton and head of its Hong Kong office and Asia distribution business, is also understood to have left in August. Dennis Kwan, a former MD in MVision’s Hong Kong office, joined Beijing’s Harvest Investment Management earlier this year to launch a USD platform, as PEI reported. Conrad Yan, the former vice-chairman of Campbell Lutyens in Asia, also departed in September to join China’s Albamen Capital Partners.

These moves could reflect a less favourable environment for placement agencies, whose primary functions have been disproportionately impacted by the pandemic. “On the primary side it’s very tough,” one senior executive at a Hong Kong-based placement agent tells PEI on condition of anonymity. “A lot of fundraising is delayed, which impacts our receivables.”

In with the new

Meanwhile, it looks like a new global force in fund placement is coalescing. Aviditi Advisors (website) has built a robust bench of IR professionals. Joining founders John Robertshaw and Ryan Schlitt (both formerly Credit Suisse) are Colin Dinneen (Sixpoint Partners), Peter Bergschneider (PJT Park Hill), Brian Price (First Avenue), Yair Oshman (Credit Suisse) and Laura Coquis (BC Partners). It is not clear if the firm has mandates in the market yet, but several sources said they have seen pitchbooks from the firm, writes Buyouts editor Christopher Witkowsky (registration required).

Welcome to Miami
Blackstone is to set up a tech hub in Miami, the Miami Herald reports. The new office will bring “as many as 215 tech-focused jobs”, which will be focused on “building out Blackstone’s internal software”. Blackstone CTO John Stecher is quoted: “We want, from a tech perspective, a peer to New York in terms of talent, and the population and universities, and the tech pipeline, all that mirrored what we [have] here.”

This is not charity
In a powerful Medium post, Jesse Draper, founding partner of women-focused VC fund Halogen Ventures, calls out the pervasive attitude among the limited partner community that equates investing in women-led women-founded companies with charity. Along with some pretty bleak personal anecdotes, Draper presents the hard facts: not investing in women is leaving a $3 trillion opportunity on the table. Says Draper: “I saw 4,972 deals last year – all companies started by women. I made 10 investments.”

Here is what caught your attention last week: