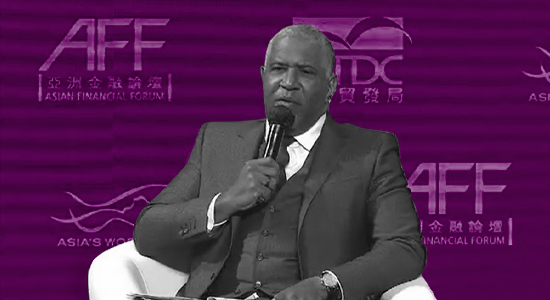 Vista on valuations
Robert Smith, founder of software giant Vista Equity Partners and one of the world’s most prominent tech investors, isn’t losing sleep over the firm’s portfolio in 2023 despite tech’s underwhelming performance in the public markets. Speaking at Hong Kong’s Asian Financial Forum on Wednesday, which Side Letter attended, Smith told delegates that enterprise software consumption remained fairly resilient in the US despite a “dramatic slowdown” in the UK and Europe, and a partial “dampening” in Asia.

“Not surprisingly, we’re not immune to the economic challenges that the world is facing, but we are dampened from it quite considerably,” Smith said. “In our world of enterprise software, while the valuations have come down – in many cases not necessarily justified by the consumption of the software – we still see demand for these products globally… it is clear that most of the businesses and customers that we have are realising they need to continue to invest in productivity tools and continue to invest in the expansion of those productivity tools across their enterprise. So, on a relative basis, an optimistic place to be an investor today.”

Vista will no doubt hope Smith’s optimism over demand for enterprise software is shared by existing and potential new LPs. As of November, the Texas-headquartered firm had collected $11 billion against a $20 billion target for Vista Equity Partners VIII, Private Equity International reported at the time. A final close is expected by this October.

PE’s gender gap
It’s no secret that PE has room to improve when it comes to gender parity. Our colleagues at Private Funds CFO recently spoke with Mary Gay Townsend, founder of recruitment firm Norgay Partners, to discuss how PE firms can hope to level the playing field in the coming years. Here are a few key takeaways:

Europe’s debt decline
PE appears to have propped up European private debt deals in the third quarter of last year. According to Deloitte’s latest Alternative Lender Deal Tracker, Q3 saw 193 completed private debt transactions, representing a decrease of 15.7 percent year-on-year compared with the same quarter of 2021 and an 11.1 percent decline on the second quarter of last year. Leveraged buyouts and bolt-on M&A transactions, however, accounted for 75 percent of European deals in Q3, the highest proportion of acquisition-related deal activity in the history of the deal tracker. Refinancing deals continued a historic decline, falling from 16 percent in the first two quarters of 2022 to 12 percent in the third quarter.

The third quarter saw the UK’s lowest ever volume of deals by percentage since the deal tracker began – accounting for 28.5 percent of Europe’s total as the number of UK deals dropped from 63 to 55. The French market, by contrast, saw buoyant activity with a share of 26 percent – its third successive quarter with a share greater than 24 percent. By the end of Q3, France had already passed the total volume it recorded in 2021.

TMT, business/infrastructure/professional services and healthcare/life sciences continued to be the three most popular sectors, accounting for 25 percent, 20 percent and 17 percent of deal activity, respectively. The three sectors have accounted for between 59 percent and 66 percent of all deals since 2020.

North Sky looks east
Minnesota-headquartered North Sky Capital is ramping up its impact secondaries business in Europe, our colleagues at New Private Markets report (registration required). To that end, the firm, which launched its debut impact secondaries fund in 2013 and is something of a pioneer in the space, has tapped Stefan den Doelder, as managing director in its newly launched Rotterdam office. Den Doelder, a former partner at Stafford Capital Partners, will be tasked with expanding North Sky’s coverage into the UK, Europe and Israel. At Stafford, den Doelder was responsible for managing $1 billion in impact and sustainable funds and investments.

Speaking to NPM, North Sky founder Scott Barrington said that “2023 is going to be a boom year for secondaries investors generally, and impact secondaries specifically”, noting that the denominator effect in institutions will trigger sales. The firm is seeking $350 million for its Clean Growth Fund VI, PEI data shows. Dry powder for impact secondaries – a niche within a niche – increased in 2022, per a November report from our colleagues at Secondaries Investor (registration required), citing final closes of funds managed by Capital Dynamics, Commonfund Capital and Arcano Asset Management, among others.