As the grand finale to our Deep Dive on three firms quietly shaking up PE, we caught up with Marc Frappier, Anthony Tutrone and Hazem Ben-Gacem, top executives at Eurazeo, Neuberger Berman and Investcorp, respectively. Find out what their plans are for their respective firms in the  video above.

Next week we’ll be releasing our third-quarter fundraising figures. We’ve had a sneak peek at the preliminary data and it looks like it’s been a big quarter, with giant funds from the likes of Vista Equity Partners and Blackstone’s Strategic Partners boosting the early numbers close to those raised in the same period last year – and well ahead of Q3 numbers from 2014-17. Look out for the downloadable data online next week.

Private equity has been in the crosshairs of some public officials of late, a point that hasn’t been lost on the British Private Equity & Venture Capital Association. In his opening address at the industry body’s annual summit in London this morning, director general Michael Moore, who was himself a member of parliament for almost two decades, said the “comprehension gap” between politics and business has grown and there is a danger it will widen even more. The industry must tell its social value story well, he added. “If we don’t, we’ll find ourselves under more public scrutiny and not of the pleasant kind.”

EQT expects a tenfold increase in carry. Digging through EQT‘s IPO prospectus last month, our colleagues at sister title Private Funds CFO were struck by the fact only 2 percent of the giant firm’s revenue was coming from carried interest. Philippa Kent has the details here. The firm expects this to evolve in the medium-term such that carry will comprise 25-30 percent of revenue. It is a testament to how rapidly EQT, like its powerhouse peers in the upper echelons of the industry, has undergone explosive growth in recent years. More than 90 percent of EQT’s AUM of €40 billion is in the pre-carry phase.

Goldman VII secondaries. Goldman Sachs Asset Management has made headway with its latest private equity secondaries fundraise and had raised at least $5.4 billion as of August, sister title Secondaries Investor is reporting. That means the bank’s Vintage VIII fund is more than 75 percent of the way to its $7 billion target. Point of interest: the fund is understood to have two sleeves, one that uses typical levels of leverage and another that uses lower levels of between 5-10 percent.

LACERS’ paces. Los Angeles City Employees’ Retirement System is ramping up its PE investment pacing. The $17.7 billion pension plan will commit between $635 million and $675 million to relationships for its $2 billion private equity portfolio in 2020, up from the current investment pacing of between $550 million and $575 million, according to a TorreyCove presentation for its latest investment committee meeting. It comes after LACERS more than doubled its re-up capacity to $100 million in March.

LACERS commitments. Los Angeles City Employees’ Retirement System has approved $45 million in commitments, including $25 million to Oak HC/FT Partners III. Here’s a breakdown of the $18.28 billion US public pension’s current exposure to alternatives. For more information on LACERS, as well as more than 5,900 other institutions, check out the PEI database. 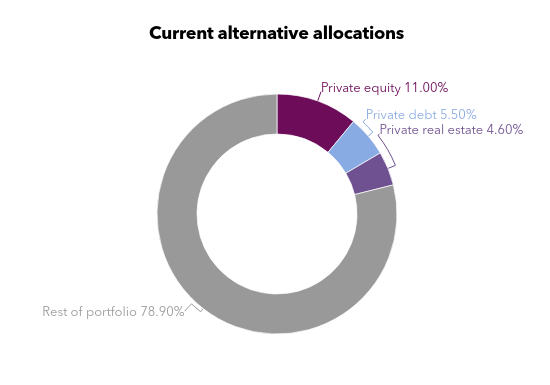 “The PE industry has been used like a pinata by the politicians and it drives me a bit crazy because I really think that they’re a great industry and bring a lot of value.”

Noah Gottdiener, chairman and chief executive of Duff & Phelps, tells Bloomberg that private equity firms tend not to be motivated by an asset stripping mentality when buying manufacturing companies today.