Our latest Deep Dive looks at three private equity firms quietly shaping the industry. These firms have managed to amass tens of billions of dollars between them for alternatives, and yet large swathes of the broader financial community still know little about them. First up is Eurazeo. The Paris-listed firm, led by chief exec Virginie Morgon (pictured), has grown from a sleepy parking spot for Lazard’s asset holdings into a dynamic multi-strategy firm poised to conquer the US and Asian markets. Find out how it plans to do so here. Also to come in the series are Investcorp and Neuberger Berman.

PEI Media owner Bridgepoint has found buyers in the restructuring process of its 2008-vintage fund, sister title Secondaries Investor is reporting. HarbourVest Partners is leading the deal in which assets from Bridgepoint Europe IV will be moved into a continuation vehicle managed by Bridgepoint. The deal, in which Hamilton Lane is a co-investor, involves around €1 billion of net asset value and is the latest in a market worth $14 billion in the first half of the year alone.

The $240 billion California State Teachers’ Retirement System wants to be “the partner of choice” for its GPs. This means a more active role in its investments – whether through bespoke club deals, partnerships with other institutional investors or acquiring operating companies, Scott Chan, deputy CIO of California’s second largest pension tells sister title PERE. “This is a vision that we want to execute across the asset classes,” Chan says. For PE, this means swifter decision-making in co-investments, closer alignment with GPs, more direct deals more frequently, and also reduced fees.

GPIF re-appointment. Hiromichi Mizuno, chief investment officer of Japan’s $1.4 trillion Government Pension Investment Fund, will continue in the role for another six months until March 2020. Mizuno, whose term was set to expire last month, has been instrumental in building the pension’s alternatives team and dealt with its historic policy shift into riskier assets. Why only six months? A spokeswoman says any extension is handed out by GPIF president Norihiro Takahashi, whose term also ends in March. Over the last four years, GPIF has handed out mandates to fund of funds managers and plans to ramp up partnerships with other asset owners. Read more here.

Right time for an IPO? Fidelity Investments, T Rowe Price and a US family office acquired around a 14 percent stake in StepStone ahead of a potential IPO, Bloomberg reported last week (paywall). The investment advisor, which has $52 billion in AUM, may do so as early as next year. If recent listings of private equity firms is anything to go by, StepStone shareholders could be in for a treat: shares in EQT soared more than 25 percent on its first day of trading last month, while Hamilton Lane, which listed in 2017, is trading at 2.5x its $16 IPO share price.

Planning on attending EMPEA’s Sustainable Investing in Emerging Markets conference in London tomorrow? PEI senior reporter Carmela Mendoza will be there. Let her know if you fancy catching up for a coffee.

Merced commits. Merced County Employees Retirement Association has agreed to commit $10 million to Cortec Group Fund VII. Here’s a breakdown of the $859.55 million US public pension’s total investment portfolio. For more information on MCERA, as well as more than 5,900 other institutions, check out the PEI database. 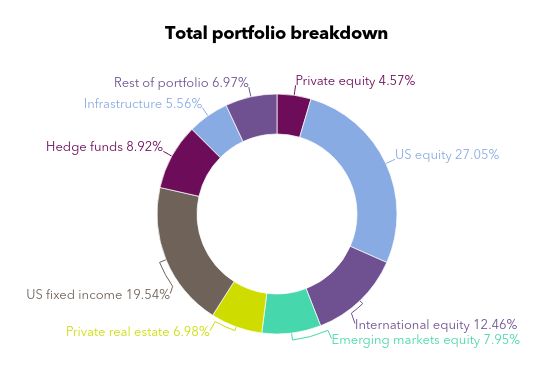 “Take advantage of any opportunity that you have, challenge anyone who says you can’t do anything. Go forward and keep your eye on your ball and [on] what you’re trying to accomplish.”

Sarah Schwarzchild, co-head of Carlyle’s Metropolitan Real Estate unit, shares her advice to young women in the industry in an interview with Bloomberg.