Adjusting to the new reality 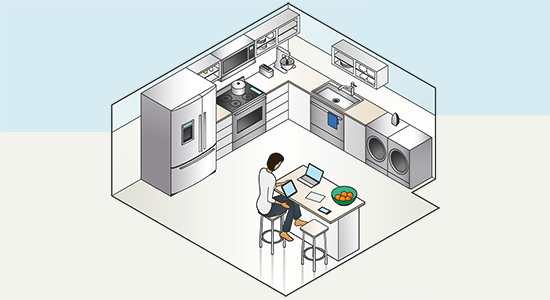 Coming to you from assorted kitchens, bedrooms and living rooms around the world…

Some of our writers and subscribers have been doing this for some time, others are just settling in (for how long we don’t know), but most of us are getting used to getting regular peeks via telecon into our colleagues’ and contacts’ home lives.

Anyone struggling to adjust is, of course, not alone. Tuning into the New York City Comptroller’s investment meeting yesterday, you could see that many are grappling with video conference tech for the first time: there was cameo from a trustee’s golden retriever and a combination of WiFi and muted mics made voting a less than simple process.

Since the start of the week, BlackRock has divided its staff into two teams – Team Black and Team Rock – that are not allowed in the office at the same time. Tikehau Capital is working from home and fully operational, the firm reported in its results call this morning.

Return of the denominator

The horror show that is the public markets has thoughts turning to the “denominator effect”. Having seen this before in the GFC, one might think that institutional investors have retooled their asset allocation practices to prevent them having to liquidate assets to rebalance their portfolios. To some extent, we hear, this is the case, but there are plenty of investors out there who – with little flexibility in their structures – may well find themselves having to freeze their programmes or offload fund interests if public markets distress is sustained. The use of credit lines complicates things further, finds Isobel Markham.

Ben Meng, the CIO of California Public Employees’ Retirement System, warned the pension’s board yesterday that the rough stretch in public markets is affecting other parts of its portfolio: “Because of the fluctuations in the market over the past few weeks, our portfolio rates are deviating away from our strategic asset allocation targets,” Meng said at the meeting, which was conducted via teleconference. “If market volatility remains aggravated, we may slip to the outer range of these targets.” The pension declined to specify which asset classes were being affected. Justin Mitchell has the story on Buyouts.

Tikehau Capital’s full-year 2019 results this morning was big on the firm’s operational and investment approach in light of the pandemic.

An anonymous PE dealmaker tells the Financial Times that anyone expecting a deal-making frenzy is likely to be disappointed, as “the shutters are coming down everywhere”.

Blue Moon rising. With coronavirus pummelling the public markets, now might seem like an unusual time to consider listing; that is, of course, unless you manufacture hand sanitiser. Hillhouse Capital-backed Blue Moon, which is based in Guangzhou, China, has picked banks to lead an IPO of up to $1 billion in Hong Kong this year, according to Reuters. Hillhouse will be hoping for renewed confidence in the markets during H2, as the Hang Seng SCHK Mainland China Healthcare Index, which reflects the performance of Chinese healthcare companies listed in Hong Kong, has fallen 20 percent in the past month alone.

State of Wisconsin Investment Board confirmed $659.4 million-worth of private equity commitments across nine vehicles between September and December 2019, according to the pension’s Q4 2019 investment report.
Leonard Green & Partners received just under half of the total value of commitments – $300 million – across two vehicles: $250 million to Green Equity Investors VIII and $50 to Jade Equity Investors fund.

For more information on SWIB, as well as more than 5,900 other institutions, check out the PEI database.