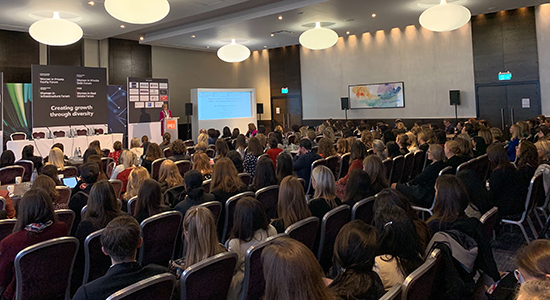 “Yes, there is fatigue but also frustration that there a lot of initiatives that don’t seem to be working,” Brenda Trenowden, global co-chair of the 30% Club and partner at PwC, told about 600 delegates during the opening remarks of the Women in Private Equity Forum 2019 on Tuesday. Companies are putting in place initiatives but haven’t spent the time on the diagnostic, data and cultural elements – whether the problem is at the first promotion level – and have not challenged themselves, she added. In PE, the business case for diversity and inclusion is largely being driven by LPs, but the conversation needs to be focused on the “how”.

Brookfield Asset Management held the third and final close of its flagship Brookfield Capital Partners V fund on $9 billion almost 21 months after launching the vehicle. The fund is more than double its 2015-vintage predecessor which raised $4 billion, although it does include a whopping $3 billion GP commitment.

Some of the most impressive young people in secondaries gathered in New York last night for sister title Secondaries Investor’s Young Guns networking event. Over drinks and canapés at law firm Weil’s offices, young industry insiders discussed everything from pricing (it’s softening) to deployment pacing (many buyers are done for the year) to how they got into secondaries (most just fell into it). These folks will be the industry leaders in time, so keep your eyes on them.

EQT is “intensifying preparations for EQT IX and expects to formally launch in 2020”, said Kim Henriksson, EQT CFO, on the firm’s Q3 earnings call on Tuesday. A target hasn’t been disclosed but the firm expects the next fund to be larger than its 2018-vintage €10.9 billion predecessor, which is between 65-75 percent deployed as of September. EQT is also expanding its geographical footprint, most recently in Milan and an office opening underway in France. 2020 could also see the launch of its venture growth strategy. EQT is “on plan” thus far: investments from January to September reached €10.1 billion (almost double the equivalent period last year); fee paying AUM increased by 11 percent year to date; and there’s been “good progress and no surprises” with its September listing.

You’ll rarely find a manager whose performance doesn’t compare favourably with its peers. That’s because benchmarking is yet another private equity metric that can lie. PEI’s latest Deep Dive series found that benchmarking can be gamed through the choice of comparable data set and vintage year – both of which can vary wildly depending on the manager. LPs can adjust for this by relying instead on direct alpha, though adoption is slow. Look out for the next in our ‘Numbers that Lie’ series tomorrow.

Inside a $12bn secondaries fund. Calling all fund terms lovers: sister title Secondaries Investor recently came across a small document detailing the fees and structure of Ardian’s latest secondaries mega-fund. The vehicle, which is seeking $12 billion in addition to $6 billion of co-investment capital, charges 15 percent carry over an 8 percent hurdle. Details on the management fee and GP commitment here.

PE pay cheques on the up. Last week sister title Buyouts published its PE/VC compensation report in conjunction with Holt and MM&K. The findings? As fundraising has ramped up to near record levels in recent years, compensation too has spiked for many North American PE and VC employees, particularly for senior professionals. Managing partners/CEOs make an average combined salary and bonus of $2.4 million (based on answers from 56 firms) and carried interest distribution of about $1.8 million (based on 26 firms). Time to ask for a raise?

Because PE’s worth it. L’Oréal has committed an undisclosed amount to Cathay Innovation Fund II, which is managed by Cathay Capital Private Equity. As illustrated below, the French cosmetics firm has invested in two 2019-vintage private equity funds.

For more information on L’Oréal, as well as more than 5,900 other institutions, check out the PEI database. 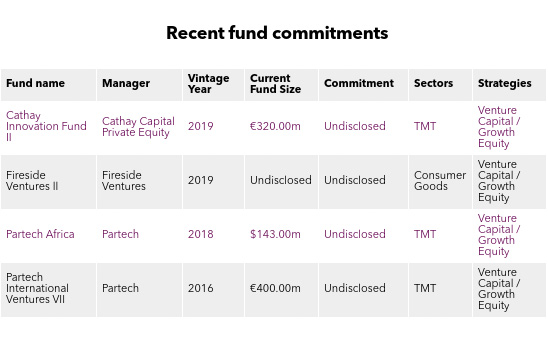 “I have no faith in any EBITDA number and a lot of transactions are quoted as what is enterprise value as a function of EBITDA, but EBITDA can be computed infinitely and not just one way.”

Ludovic Phalippou, professor of financial economics at Oxford University’s Saïd Business School, says the number of adjustments people can make with EBITDA can reach the sky.