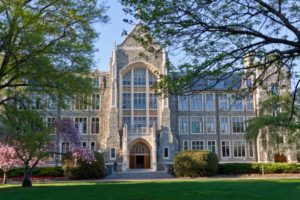 Georgetown University moved last week to divest from fossil fuels, including its exposure through private funds, as the movement to get major LPs out of the business appeared to gain steam.

Georgetown released a policy on 6 February called “Policy on Impact Investments and Fossil Fuel Divestment”. The school’s $1.78 billion endowment pledged to “cease making new investments in any company or fund whose primary business is the exploration or extraction of fossil fuels, including all forms of coal, oil and natural gas”.

The school will “divest from private investments of any company whose business is the exploration or extraction of fossil fuels, including all forms of coal, as soon as it is prudent and within the next 10 years. The university will divest fossil fuel holdings during this time in a manner that is both financially responsible and expeditious.”

It is unclear whether the move would include secondaries sales and the endowment did not respond to multiple requests for comment.

A group of Harvard University faculty passed a resolution last week calling upon the school’s endowment to divest from the fossil fuel industry, including private investments.

The resolution called upon the university to “instruct the Harvard Management Company to withdraw from, and henceforth not pursue, investments in companies that explore for or develop further reserves of fossil fuels, or in companies that provide direct support for such exploration and development”.

The motion said the endowment should “over a reasonable period of time, extend those instructions to advisors of investment vehicles used by Harvard’s endowment, including commingled funds where Harvard is not the sole investor; and ensure that any advisor who may be unwilling or unable to comply is replaced by one who is willing to carry out these instructions”.

“This has to be done over a period of time,” Harvard English professor James Engell told sister publication Buyouts, “and [how long that time is] we cannot state because we don’t know what is committed for what period of time currently. The endowment does not make that information public.”

The vote of the Faculty of Arts and Sciences was 179 in favour of the motion and 20 against, according to the Harvard Crimson.

Unlike Georgetown, Harvard’s administration has not been amenable to the motion.

Harvard spokesman Jason Newton provided Buyouts with this previous statement: “While we agree on the urgency of this global challenge, we respectfully disagree with divestment activists on the means by which a university should confront it.”

Newton told Buyouts the vote would be shared with the Harvard corporation. “I am confident that the corporation will give it the thought and consideration it deserves,” Harvard president Lawrence Bacow told the Harvard Crimson last week.

Harvard’s endowment is much larger. As of end-June it was valued at $40.9 billion, with 20 percent of that – about $8 billion – in private equity.

Harvard plans to increase its private equity and venture allocation in the future as part of a five-year plan to overhaul its portfolio.

Both Georgetown and Harvard have been facing pushes to divest from fossil fuels. A group called GU Fossil Free tweeted its thanks to Georgetown’s board of directors for agreeing to the divestment, while a group called Divest Harvard has been agitating at that school. Last fall, activists grabbed headlines by disrupting a Harvard football game against Yale to call for fossil fuel divestment.

At a November meeting where CalPERS heard from divestment activists, chief investment officer Ben Meng indirectly addressed divestment activists by arguing the fund needed to make about $24 billion in benefit payments every year, and strategy must be “100 percent aligned with generating the needed returns”.

“We ask that [outside activists] respect our fiduciary duty, acknowledge the aforementioned unique challenges we face and appreciate the fact that even with our constraints and unique challenges, we continue to lead on climate change initiatives on a global scale,” Meng said.

In a required environmental report published in December, CalSTRS called divestment a “last resort action” and said it would have “negative impact on the health of the fund, while severely limiting our ability to shape corporate behaviour for long-term sustainable growth.”

Buyouts reported last week that energy PE fundraising appears to have dried up in recent years, due in part to LPs lowering their allocations to oil and gas due to concerns over climate change.