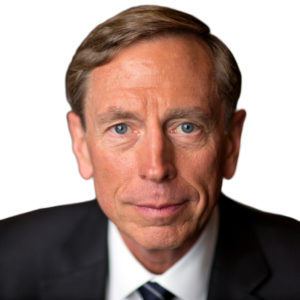 Geopolitics are playing an ever-greater role in investment decisions thanks to the rise of China, growth in populism across the world, a resurgent Russia, revisionist regimes in North Korea and Iran, continued threats of Islamic extremists and the “hollowing out of the center in Washington”, according to KKR partner and chairman of the KKR Global Institute David Petraeus.

“Just in the six-and-a-half years I’ve been with KKR, the geopolitical risk component has skyrocketed in importance in determining whether or not you should make an investment, and if you do, what are the risks and how do you mitigate them,” Petraeus said in a fireside chat with Orange County Employees Retirement System’s chief investment officer Molly Murphy at the pension’s 31 October investment committee meeting.

“We are all looking for greater returns than you can get from a variety of the traditional [investments],” he said. “That does mean you’ve got to go a bit further afield. We are very much doing that, but we want to do it in a way that is as informed as is possible.”

Petraeus, who joined KKR in 2013 with a mandate to establish a geopolitical risk analysis institute, spent 37 years in the US Army and served as director of the Central Intelligence Agency.

Petraeus said the geopolitical risk analysis institute works with KKR’s macro-economic analysis and ESG teams to present analysis, and it serves three clients: the various KKR investment committees, KKR portfolio companies and investors such as OCERS, with whom the firm has created long-term relationships.

The institute plays a significant role in the investments KKR makes globally across its private equity and other strategies, especially in countries and regions where the firm is investing for the first time, Petraeus said. The institute helps to determine whether the firm should make an investment in the region and how the risk of that investment might be mitigated.

Petraeus has vetoed deals, including one where the country had locked down its bank system, he said.

Petraeus originated KKR’s first deal in Mexico, Petroleos Mexicanos, the state-owned oil company known as Pemex, in 2016. “The deal blew up four times on the road to the finish line,” he said.

His team also engineered the firm’s first deals in the former Yugoslavia, Africa, the Philippines and elsewhere, and in each case, it was important to “give geopolitical thumbs up to recognise the risks that were there” and take steps to mitigate them.

For instance, Petraeus said KKR had “well-founded” concerns about the potential for ethnic violence when it was making an investment in an Ethiopia-based rose grower. The firm took measures to prevent damage to its investment, including managing land appropriations, water usage and worker concerns, and hedged the local currency, he noted.

Petraeus’s team also helps the 100 portfolio companies, as well as the 50-70 companies in which the firm has a minority investment.

He spoke about the firm’s investment in European cable and pay-TV operator United Group – although he did not mention the portfolio company by name – which operates across Southeast Europe and ran into trouble. The company was not allowed access to telephone poles or to invest in fibre. From previous time spent in the region, Petraeus knew the leaders, roped in US ambassadors and KKR engaged the European Bank for Reconstruction Development as a co-investor.

“The three of us literally would go in with linked arms and meet with the presidents, the regulators…and try to impress upon them the need to actually follow their own laws, and that the competition council should really not be anti-competition,” Petraeus said.

The biggest geopolitical concern right now is getting the relationship between China and the US right, Petraeus noted, adding that there should be acknowledgement that the two countries are one another’s biggest strategic competitors but are also among one another’s biggest trading partners.

Fundraisers 3 hours ago
Added to your Saved Articles
Loading
Unsave Article
Please confirm you would like to remove this article from your saved articles.
Share with other subscribers
Only logged in subscribers of this site will be able to access the shared article.