Asian insurers are becoming an important force in private equity as deregulation results in increasing allocations to the asset class.

Insurance companies in Asia have very limited investment channels and have traditionally allocated to cash deposits, foreign securities and government bonds. But as yields fall in the Japanese and Taiwanese bond markets, domestic insurers have started to look elsewhere. Some are also seeking greater risk diversification by entering new countries and business areas such as infrastructure, environment, and even financing for small and medium enterprises.

Leading the pack are the Taiwanese insurers. The loosening of government restrictions in the past five years has allowed the companies to invest in domestic and foreign private equity funds. More recently, Taiwan's Financial Supervisory Commission relaxed the constraints on overseas investments, which had been capped at 30 percent of total assets. In March this year, it introduced a three-tier system based on the insurer's risk-based capital ratio, allowing them to allocate a greater portion of their portfolios to overseas assets.

Cathay Life Insurance, the country's biggest insurer with about $140 billion of assets and $3 billion allocated to alternatives, expects to commit an extra $1 billion in the next year. The insurer has backed KKR's $6 billion Asian Fund II and Vista Equity Partners' $5.8 billion sixth buyout fund. Meanwhile, Fubon Life Insurance, whose current allocation to private equity stands at 40 percent, said it would increase its debt and private equity exposure in the US, targeting to invest an aggregate amount of $1 billion across four managers in the next 12 months. Fubon previously committed to funds managed by Blackstone, KKR and Warburg Pincus, according to PEI data. Taiwan Life, which merged in September 2015 with local insurer CTBC Life Insurance, is said to be looking to invest about $300 million in the asset class in the next year and will continue do so incrementally as its portfolio grows. 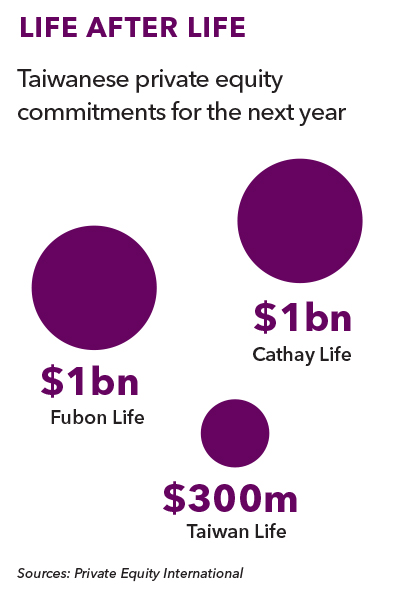 Taiwanese insurers are, however, cautious about overexposure to alternatives. Under the current regulations, they can only invest up to two percent of their investable capital, comprising shareholders' equity and statutory reserves, into private equity and hedge funds. While local insurers have been lobbying to lift the investment cap to five percent, the government is yet to make a decision.

EY Taipei estimates that as much as NT$400 billion ($13 billion; €11 billion) of unlocked capital could be invested in private equity if the government lifts the ceiling.

In July, China Life Insurance, the country's biggest life insurer, told PEI it would invest a maximum of five percent of its 2.4 trillion yuan ($357 billion; €325 billion) portfolio in the asset class in the next year, focusing on buyouts and co-investments in developed countries. Its main rival, Shenzhen-headquartered Ping An Insurance – a major investor in multimillion-dollar property and logistics projects in the US – has also made its first step in private equity. It is part of a consortium of Chinese investors backing UOB Venture Management's 100 billion yuan Sino-Singapore Connectivity Private Equity Fund, which will target financial services, transportation and logistics companies in Chongqing and South-East Asia.

In 2015, in its latest move to broaden the scope of the industry, CIRC allowed companies to set up their own private equity funds to invest in strategic industries supported by the government such as healthcare, technology, biotech and infrastructure. Beijing-based Sun Life Everbright Life Insurance was the first to establish a private equity fund alongside Anhua Agricultural Insurance Company, Chang An Property and Liability Insurance, Soochow Life Insurance, Kunlun Health Insurance and Taishan Property & Casualty Insurance Company. That fund aims to raise 100 million yuan to invest in SMEs.

Similarly, Japan's $3 trillion insurance sector has been branching out into private equity, as well as investing overseas to seek out higher returns on capital in markets that offer positive growth. With yields more robust than at home, investing overseas makes sense. 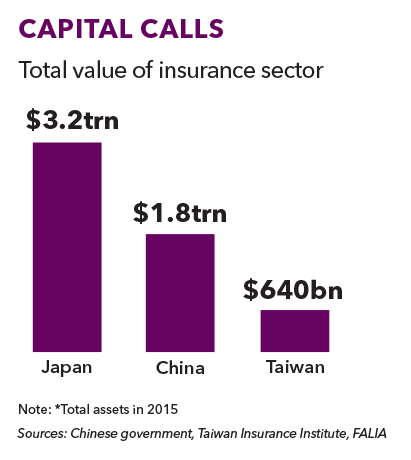 Japan's largest life insurer by assets, the ¥62.3 trillion ($600 billion; €544 billion) Nippon Life Insurance, is looking to invest in about 30 funds in the next 12 months, according to PEI data. Although it mainly invests in US and European fund managers, it plans to become more active in Latin America. The company has also been busy abroad – in October, it completed the acquisition of MLC Life, the life insurance business of National Australia Bank, for ¥204 billion. “We think many limited partners, including Japanese insurance companies, are becoming more aggressive towards private equity investment because of the current negative interest rate environment,” a source close to the firm told PEI.

Another Japanese player, Dai-ichi Life, with ¥50 trillion of consolidated assets, said it will increase holdings in private equity and hedge funds this fiscal year, while Tokyo-based Japan Post Insurance, with total assets of about $800 billion, launched an alternative assets division in September. The move mirrors sister company Japan Post Bank, which set up a private equity division in December 2015.

Yield-chasing, overcapitalised insurers in Asia are mainly drawn to private equity's ability to generate returns in a low interest rate environment. And the fundamentals are good: multiple reforms, increasing awareness of retirement needs in the region's ageing societies and high acceptance of insurance products will drive increased allocation to private equity in the near term.