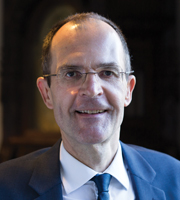 Emerging markets seem to have fallen out of favour. In the first half of 2016, limited partners committed only $12 billion to private equity funds in the region. If that pace continues, this could be the slowest fundraising year for the space since the financial crisis.

In contrast, global commitments are on track to set a post-crisis record as LPs seek ways to boost their returns in a low-yield environment. In the first six months of 2016, the region’s share of the global fundraising market dropped to 7 percent, down from a peak of 21 percent in 2011. Funds targeting emerging Asia, by far the largest sub-region, absorbed 6 percent of global commitments in the first six months of 2016, down from 15 percent five years ago (see chart). 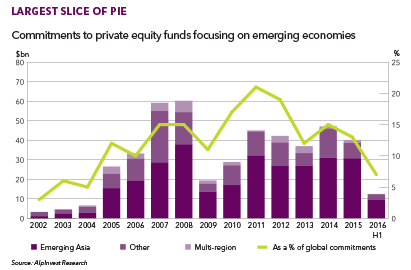 As asset allocators rebalanced their portfolios, they appear to have made two simplifying and potentially misleading assumptions. First, these markets appear to have been treated more or less as a homogenous asset class. In reality, however, its sub-regions have significantly different risk-return characteristics.

Asia-focused funds have generated substantially higher horizon internal rates of return than vehicles focusing on other non-mature markets, regardless of the investment horizon, according to Cambridge Associates. Over the 10-year period to 31 March, 2016, vehicles in the sub-region achieved a net IRR of 13.39 percent, 250 basis points more than the sector as a whole. For the five-year period ending 31 March, 2016, Asia again outstripped the rest, with net IRRs at 11.40 percent versus 8.48 percent.

These returns – all reported by Cambridge Associates – are unadjusted for risk. While there is little consistent information on leverage in Asia, AlpInvest’s proprietary database shows that debt multiples in co-invest deals averaged 2.8 times EBITDA in 2000-15, far less than Europe’s 5.4x or the US’s 6.5x.

FEEL THE BENEFIT
Several reasons suggest the downward trend in fundraising could soon be troughing. Asia-focused funds could be particularly well positioned to benefit.

Economic fundamentals remain intact. Despite the recent slowdown, China’s economy has expanded by almost $570 billion a year in 2010-16, adding an economy of the size of Germany’s to global output during this period. India’s rapid growth added one the size of the Netherlands’. Millions of Chinese people and Indians have been lifted out of poverty, resulting in a profound shift in consumer behaviour towards durable consumer goods and sophisticated services. Public markets are not as well positioned to provide access to such opportunities as they are dominated by extractive industries, financials and industrials.

The latest IMF projections foresee global economic growth accelerating over the medium term, and the organisation expects it to be led by markets that have made considerable progress in addressing their macroeconomic imbalances. Emerging markets are anticipated to account for more than 80 percent of the growth forecast between 2016-21; Asia alone is projected to contribute 60 percent, dwarfing developed countries’ expected contribution by a factor of three.

The subdued amount of commitments in recent years could bode well for future returns, especially as penetration rates in Asia have generally remained far lower than in mature markets. Historically, there is an inverse relationship between private equity performance and inflows of capital. If this relationship holds, higher returns are likely to prompt LPs to increase their exposure again.

A final reason could lie in the expected increase in the share of non-mature markets, and emerging Asia specifically, in global benchmarks that are widely employed by asset allocators. At present, the region represents 7.5 percent of the MSCI’s ACWI index, substantially less than the region’s 19 percent share in global market capitalisation and a fraction of its weight in the global economy. However, as more stocks fulfil MSCI’s investability criteria, the current gaps look set to narrow. Private equity could be a preferred route through which investors adjust their exposure in anticipation of continued benchmark changes.