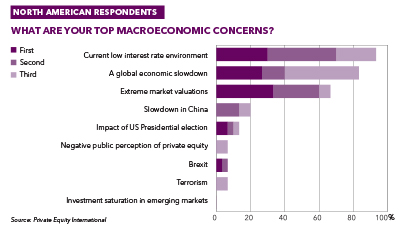 Despite valuations staying elevated throughout 2016, this clearly hasn’t disheartened North American investors. Perspectives 2017 finds the overwhelming majority of investors in North America satisfied by the fact their private equity portfolio performed in line or better than they had expected.

According to the latest PEI survey, more than 43 percent of North American LPs saw their private equity investments perform as expected, while 40 percent said they performed better than expected.

This came despite a strong year in the financial markets marked by bouts of financial market volatility surounding Chinese growth, continued pressure on energy prices and the UK voting to exit the European Union. The survey was conducted prior to Donald Trump’s unexpected election as the 45th US president.

Looking forward, LPs appear more concerned about the current interest rate environment and the prospects of a global economic slowdown over the next 12 months, although extreme market valuations continue to create anxiety among investors.

With that in mind, a majority of LPs, or 52 percent, expect performance for the next 12 months will be about the same as last year, but nearly a third, or 31 percent, said they are less confident about returns in the next year.

First-time funds are popular with North American investors seeking diversification in their portfolios. Asked whether they plan to invest in first-time funds, 60 percent of North American LPs responded positively, with most of them investing opportunistically in debut funds.

In Western Europe, the trend is similar, with the majority of respondents, or 62 percent, also saying that they invest opportunistically in first-time funds. In emerging markets, the majority, or 64 percent, said they don’t invest in first-time funds at all.
Co-investments continue to attract investors looking to boost returns and to lower fees at the same time.