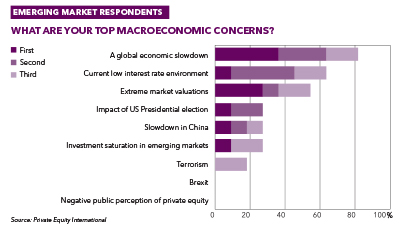 Click here for the full survey of emerging market LPs

Emerging markets LPs remain committed to investing in private equity even as the outlook for returns dimmed this year due to global uncertainties such as Brexit, a Trump presidency and the fluctuations of major currencies.

The survey chimes with the kind of caution voiced by LPs in Asia-Pacific over the last few months as they seek higher yield and returns. China Investment Corporation, China’s $814 billion sovereign wealth fund, said its share of private equity co-investments and club deals rose in 2015 as they lowered expectations on returns ‘ever-growing downside risks’ in global markets. Meanwhile, the New Zealand Superannuation Fund says there is a “shortage of good investment opportunities” and is taking on less risk than a year ago.

Nearly a third of emerging markets LPs in the PEI survey felt private equity returns will remain the same and continue to outperform public markets over the next 12 months. About 33 percent said they are more confident about private equity’s performance in the next year, while the remaining respondents were split between feeling ‘much more confident’ as well as ‘less confident’ about returns.

Demand for direct investments and separate accounts will continue to rise in the next year, with more than 36 percent of LPs saying they will increase activity in each of these structures.

With macroeconomic conditions in the coming year, emerging markets investors are mainly concerned about the global economic slowdown, followed by extreme market valuations, the current low interest rate environment, and the impact of a Trump presidency that could force a faster devaluation of the yuan.

Emerging markets LPs continue to face a number of challenges. Chinese debt is growing and many investors are worried about a yuan devaluation. Disruptions such as Brazil’s corruption scandals and tensions in South-East Asia are all reminders of geopolitical risk. Investors are especially sensitive about any policy slip-ups by the Chinese government.