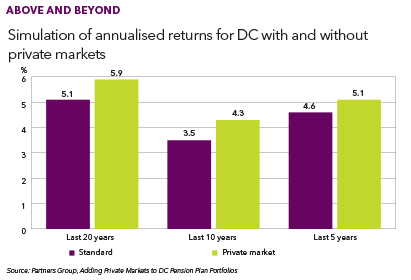 To asset manager Partners Group, providing the defined contribution retirement markets with access to private equity is a pressing issue. These schemes only have 2 percent of their capital in private equity, compared with 17 percent for defined benefit.

“DC will replace DB,” Partners Group global head of consultant relations Joanna Asfour says. “Maybe managers are ignoring the DC market right now because of structural requirements, but over time they may realise they want access to a new part of the capital market and can’t necessarily rely on DB.”

Partners Group is one of a few private equity firms that has been opening up the asset class for the fast-growing DC market. It represents almost half of all global pension assets, according to the firm’s study, which Asfour co-authored.

But while DC plans have increased in recent years, their investment performance has lagged that of the defined benefit plans, and Partners believes the reason is because private equity is largely missing.

In fact, a recent study by Pantheon – which also offers products catering to the DC market – shows an individual pensioner could be missing out on nearly $180,000 by not including private equity in their retirement plans.

“One of the key benefits of private equity is that we’re active owners of assets,” Asfour says. “We have very specific value-creation plans and effectively are in control of creating that alpha, that excess return [that outperforms the public markets].”

Of course, there are structural challenges, but to combat these Partners suggests fund managers provide daily valuations on their private market investments based on information such as interest accruals and daily foreign exchange movements. They could also mix the portfolio with private debt, listed private equity and listed infrastructure – which are more liquid alongside traditional illiquid private investments.