If you were trying to raise a Europe-focused fund in 2011, you probably found yourself talking more about the fate of the European single currency than the state of your deal pipeline. “I remember sitting in hotel rooms in America, turning on CNN to see turmoil in Greece or unrest in Spain. The Europe story was dismal,” says Chris Davison, partner and head of investor relations at Permira, recalling the capital raise for the firm's 2014 Fund V.

Things have changed since then. Permira wrapped up fundraising for its sixth flagship global private equity fund in January and the experience of raising the capital was markedly different. For one thing, it took less than half the time. The firm raised €7.5 billion for Permira VI, above its €6.5 billion target and on its hard-cap. Around €290 million is accounted for by the GP commitment. 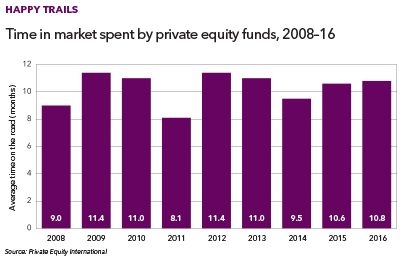 The firm opened the data room and issued the investment memorandum in February 2016, held a first close at the end of June and had effectively closed the fund in September, albeit with three investors which needed a couple more months to finalise their processes. The firm held the final close in January 2017.

A faster fundraise is not a Permira-specific story. The average time it takes to close a fund has gone from 11.4 months in 2012 to 10.8 months in 2016, according to PEI data, and blue-chip brands have reported campaigns that wrapped up in as little as three months. There are clearly industry-wide factors at play: not least the amount of capital that has been distributed to investors in the last three years. Permira's LPs have been sharing in this; the firm is understood to have returned around €9 billion in distributions to investors net of capital calls since 2012, due in large part to realisations from the firm's €9.6 billion fourth fund.

Also, despite the various geopolitical developments of 2016, external threats to the investment performance – such as the eurozone crisis – were less of an issue this time around, says Davison. Any investor sensitivities about external issues related less to elections or economic slowdowns, and more to high asset prices and the threat of too much money chasing too few deals. This meant more time discussing investment discipline, deal rationale and the fund's deployment pace.

Also on LPs' agenda was downside protection. “There was absolutely a lot of focus on how we performed during the last financial crisis,” says Davison. Happily for the firm, it was able to answer these convincingly. Fashion brand Hugo Boss, which at one stage during the crisis saw its equity value written down by more than 50 percent, was ultimately fully realised at 2.3x cost. Even Freescale Semiconductors, which Permira acquired in a mammoth $17.6 billion club deal in 2006 alongside Blackstone, TPG Capital and Carlyle and which fell into distress during the crisis, was realised at 1.3 times' investors' money.

“Our loss ratio for Fund IV will be the lowest of any of our funds. To be able to demonstrate that on a fund through the most severe economic crisis of recent times was a good set of proof points for us,” says Davison.

Permira managed to add some new investors in the latest fund, as well as some returning investors who had sat out of Fund V, although Davison declines to be specific.
The firm held two interim closes and at each of these there was a scaling back of LP allocations to ensure the fund remained within its hard-cap.

As well as the capital raised for the firm's sixth flagship fund, Permira also raised more than €1.1 billion during 2016 for its debt strategies, including holding a €900 million first close for its direct lending fund, Permira Credit Solutions III.

One aspect of a modern fundraise is the increasing proliferation of investor side letters. As Davison notes, “there are more of them and they are often getting longer and more in depth.” In this instance, they were not driven by LP demand for co-investment, as is often the case, because Permira declined to give any specific undertakings to LPs on co-investments. Among other topics, there was more discussion in side letters about the type of information some individual LPs required and how they wanted it delivered.

While these lengthier side letters and more complex reporting requirements are par for the course for a modern fundraise, they are clearly not slowing down the process.

SMALL AND STRAIGHTFORWARD
Finnish lower mid-market firm Vaaka Partners may be small, but it is one of a small handful of private equity firms that can claim to have raised a fund in just three months.

In early March the firm held a first and final close on its third fund at its hard cap of €225 million, having launched the data room in mid-November. “It went pretty smoothly,” Juha Peltola, the firm's manging partner tells PEI.

There are 24 investors in the fund, including international LPs such as AlpInvest, BP Pension Fund and Deutsche Bank Private Equity, as well as Finnish pension funds Ilmarinen, The State Pension Fund of Finland and Varma.

At €225 million the latest fund is 50 percent larger than Fund II. It will pursue the same strategy but potentially make 12 platform investments instead of 10, and invest more capital into add-on acquisitions.

From a practical standpoint, Peltola says the speed was helped by the quantity of information the firm made available in its data room. “It wasn't rocket science,” he says, “we basically took the ILPA guidelines for what should be in a data room. The feedback from LPs was that this was the sort of information they would expect from a billion-plus fund rather than a €200 million fund.

“From a process perspective, the decision to invest in a high-quality data room saved us a lot of questions.”