Private equity fund managers must justify the very high cost of the asset class to their investors through superior returns every time they raise a fund, or savvy investors will take their capital elsewhere.

That was the message from CVC Capital Partners’ investor relations partner Marc St John, before the launch of the firm’s latest fund, which has just closed on a record-breaking €16 billion. “If we can’t do that – and a lot of the GPs had difficulty with that in the global financial crisis – you’re going to have to lower your prices,” he told delegates at the BVCA Summit 2016 in London in October.

CVC has had no trouble justifying its fees to investors. After just five months in market, it held a ‘one-and-done’ on the largest euro-denominated fund in private equity history.

The fund officially launched in January with a €12.5 billion target. A month later the firm held two due diligence weeks where its investment professionals from around the world gathered to answer questions. LPs then had until 8 May to submit commitment documents, as reported by Private Equity International. 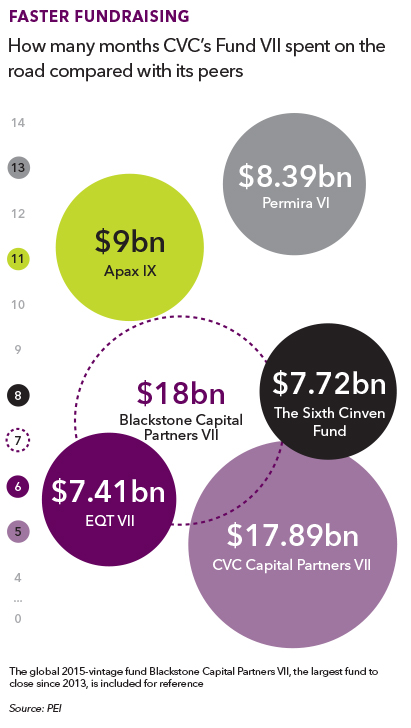 CVC held more than 1,500 LP meetings over the five-month fundraising, including during the two due diligence weeks. CVC Capital Partners VII received €30 billion-worth of interest from LPs despite offering no early-bird discount and lowering its hurdle rate to 6 percent.

Even with talk of GPs tightening the fund-term screws on LPs in the buoyant fundraising environment, it is still only firms producing exceptional returns that are gaining much traction.

CVC has the record to back it up: the firm has fully exited 120 of the 154 investments made since it began investing Fund I in 1996, generating a gross multiple of 2.2x and a gross internal rate of return of 26.3 percent, according to documents prepared for the New Jersey State Investment Council’s 29 March investment meeting seen by PEI.

It is no coincidence that the other mega-fund to mess around with the sacred 8 percent hurdle rate on its recent fundraise is Advent International, which scrapped it entirely for its $13 billion Fund VIII.

It, too, is on the higher end of the returns spectrum compared with its mega-fund peers. The 2012-vintage, $10.8 billion Advent International GPE VII was delivering a 15.1 percent IRR and a 1.3x return as at 30 June 2016, according to the California Public Employees’ Retirement System. Its sixth fund has an IRR of 17.5 percent while its fourth and fifth funds are posting impressive IRRs of 52 percent and 42.8 percent, respectively.

Documents prepared by StepStone for the State of Connecticut Retirement Plans and Trust Funds put these in context. CVC’s risk-adjusted performance – defined as gross TVM over (1 plus the loss ratio) – from 2002 to 2012 is 2.0x. That puts it ahead of European peers Cinven (1.8x) Permira (1.7x), Apax Partners (1.6x) and BC Partners (1.5x).

Despite a broad downward trend in private equity returns, CVC has high expectations for this fund, targeting a gross IRR over 20 percent and a gross multiple of at least 2x, according to the New Jersey documents. If it manages that, its IR team will have a good chance of justifying its fees to investors next time around.