A “car crash” – that’s how the director general of the industry body representing the world’s second-largest private equity market summed up the UK general election last month. It was a vote that resulted in the Conservative party losing its majority, a hung parliament and further fog descending on the Brexit process.

As this story went to press, we are still in the dark about several key points – issues that affect the private equity industry across various areas. Prime Minister Theresa May is seeking to form a government with the Northern Irish right-wing Democratic Unionist Party, although at press time negotiations were still ongoing. 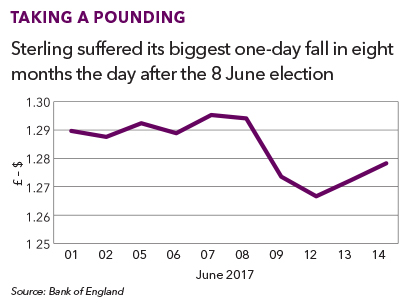 “Undoubtedly, there will be increased volatility in the UK economy,” Hands said. “For private equity investors, who are mainly non-sterling based, the decline of sterling could, however, provide significant buying opportunities.”

The pound suffered its biggest one-day fall in about eight months on the Friday following the 8 June election day, stabilising on Monday against both the dollar and the euro in morning trading.

Too many political shocks are not good for business and the UK “cannot continue to be led from one direction to another”, Hands said. “There has to be compromise – and the realisation that political opportunism is destroying the UK, and what businesses need is a stable environment.”

In light of the result and the continued uncertainty surrounding how the British government will negotiate Brexit proceedings, the UK mid-market may lose its attractiveness, according to Fabien Prévost, chairman and chief executive of Paris-based Omnes Capital.

“The silver lining is that human and financial capital will favour continental Europe over the UK now,” Prévost says. “With many of the key European elections behind us, and a greater sense of a unified union, I think investors and PE executives will see European PE as a more attractive asset class than UK mid-market.”

Industry insiders agree the result’s biggest effect is likely to be on the Brexit negotiations, with some predicting the probability of a ‘hard’ Brexit is greatly diminished.

“The private equity industry would hope that a favourable deal for the financial sector or regulatory equivalence would now be a real possibility to achieve in the transition and final deals,” says Sunaina Sinha, managing partner of placement agent and advisory firm Cebile Capital. Hands, meanwhile, noted that in the long-term the election result would likely result in a better Brexit or no Brexit – a positive for the UK.

Stewart Licudi, a managing director in the financial sponsors team at investment bank William Blair, notes that uncertainty, mainly around Brexit, has meant the UK market has been quieter in the first half of this year, particularly in the lower and upper mid-market, but stresses that “right now, for good quality assets there are still buyers that are willing to pay”.

“I’m not convinced people will sit on their hands for two to three years while [Brexit] unfolds,” he says. “I think just knowing who and how the negotiations will be handled will give some clarity to people. At least they’ll be able to see what cards are on the table.”