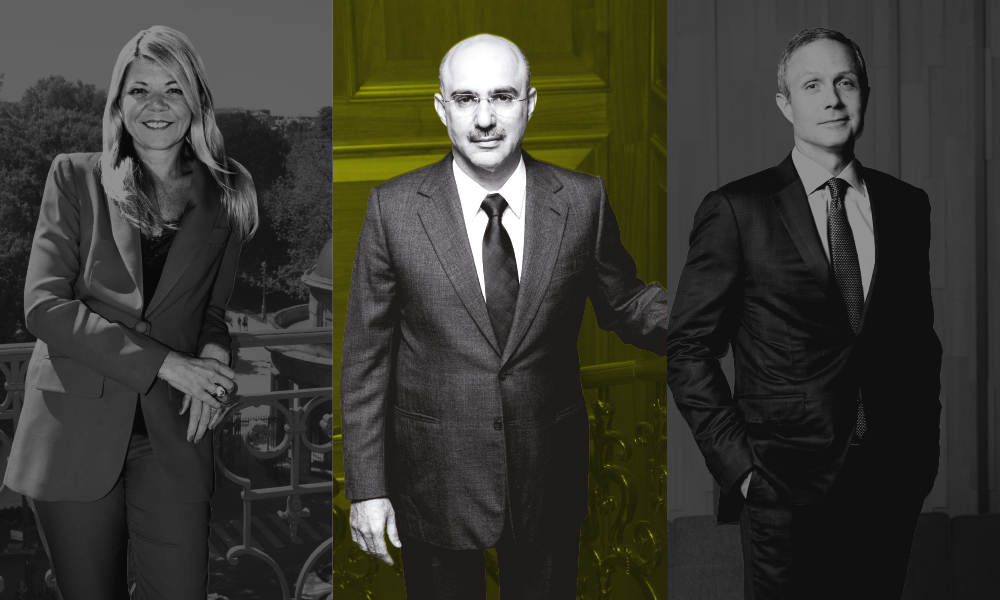 Read about the other two firms: Eurazeo, with Neuberger Berman to come

On joining Investcorp, new members of staff are given a book written by founder Nemir Kirdar. Need, Respect, Trust details how the Iraqi emigre’s dreams of becoming a public servant were dashed by a 1958 coup d’état, setting off a chain of events that led to the foundation of a firm which, as of the end of June, has $28.2 billion in assets under management.

Though the Bahrain-listed firm was founded in 1982, its seeds were planted years before. In the mid-1970s, a sharp rise in energy prices made governments of oil and gas-producing states in the Gulf very rich. Even after investing heavily in new infrastructure, there was too much surplus cash for the plain vanilla stocks and bonds being offered by the banks in the region.

The companies and individuals who had grown rich providing services to the oil and gas sector were experiencing the same problem, with less capacity to do anything about it. Most in the private sector had no access to international investment firms and if they did, were hardly considered priority customers. On top of this, their investment culture was different to the comparatively institutionalised family offices of Europe and North America.

Kirdar, who in the late 1970s was Gulf banking head at Chase Manhattan Bank, pushed the bank to build a Gulf-focused portfolio management business that would specialise in alternative assets.

“Chase simply would not create,” writes Kirdar. “I talked and lobbied and cajoled until I could do no longer. I began thinking seriously of getting out and establishing an institution for the region – an organisation that would become the bridge I had been dreaming of between the Gulf and the West.”

Need, Respect, Trust describes a firm formed to serve a particular type of customer, over time becoming very good at it. Since Private Equity International last caught up with Investcorp for its Privately Speaking feature in 2016, however, the firm has been on a path of rapid change.

It has expanded into India and China, moved decisively to institutionalise its investor base, introduced a fund-based model of investing in its private equity unit and added credit and infrastructure to its armoury. In 2015, Investcorp said it had the ambition to reach $25 billion in assets under management. Pleased with the progress made, in 2017 it doubled that target to $50 billion by 2024.

How is Investcorp going about achieving this growth? And can it rapidly expand its offering without compromising what has made it successful so far?

Looking beyond the Gulf

From formation, Investcorp’s shareholding structure was designed to fit its investor base. Unlike most Gulf-based firms, in which a single wealthy individual sets himself up as primary owner and invites friends and relatives to join as shareholders, Investorp was owned by 336 individual investors spread across the six GCC countries.

As well as making a statement that the firm was pan-regional in outlook, having a diversified shareholder base made it much more difficult for shareholders to wrest control from management, giving comfort to the high-calibre investors it wanted to attract, says one senior buy-side figure who knows Investcorp well but is not currently invested.
The firm’s model of private equity investing, focused primarily on the European and North American mid-market, was also carefully tailored. Family offices and high-net-worth individuals in the Gulf tend to be reactive to investment proposals. They also like to enter at a later stage so they can be as comfortable as possible with the investment thesis, said co-CEO Hazem Ben-Gacem, speaking to PEI at Super Return in February.

“There’s now more and more blue-chip GPs tapping into the retail side of the market, the private banks and UHNW individuals,” says one GP who has worked with the firm. “Investcorp already has that private money backing. In a way, it has done the hard part.”

The “hard part” refers to the intensive relationship building required to win the trust of such investors. Investcorp has 80 relationship managers, not including those it picked up via acquisition, most in the Gulf region. According to Ben-Gacem, they are in touch with their clients on an often weekly basis, sometimes to discuss investments but more often than not just to enquire about an investor’s well-being or that of their family. Gulf investors accounted for 39 percent of Investcorp’s AUM at end-June 2019, down from 41 percent a year earlier. “They were very thoughtful people and you could speak to the higher ups without feeling scared,” says a former employee of Investcorp, who now works for another GP. “I found the same thoughtfulness when they worked with their investors or portfolio companies. They really encompass the Middle East culture. It takes time to build a relationship but then they are your friends for life.”

In June 2015, Kirdar retired as executive chairman and chief executive of Investcorp, becoming chairman of the board of directors, a role he relinquished in October 2017. He was replaced as executive chairman by non-executive director and former head of the Omani air force Mohammed Alardhi, with Gulf business head Mohammed Al-Shroogi and chief financial officer Rishi Kapoor taking over as co-CEOs. Ben-Gacem stepped into Al-Shroogi’s shoes on his retirement in August 2018.

The changes sparked a rapid period of growth. In October 2016, Investcorp acquired the debt management business of 3i Group for £222 million, bringing $10.8 billion of assets under its management. By the end of the 2017 fiscal year, largely due to the 3i deal, the firm had doubled its assets under management to $21.3 billion.

In October 2018, Investcorp committed $250 million to China Everbright’s New Economy Fund, a vehicle targeting $550 million to invest in Chinese artificial intelligence and internet-based companies. This was the first investment the firm had made in China since 1982. It followed this in January with the acquisition of Indian private equity and real estate unit IDFC Alternatives, which brought $430 million of Asian assets under Investcorp’s management.

February 2019 saw the firm enter the infrastructure space via a joint venture with Aberdeen Standard Investments. The partnership is aiming to raise a fund of between $800 million and $1 billion to invest in projects in the GCC, with a bulk of the capital coming from the region. The firm has added a steady stream of assets via its series of tech funds, the most recent of which, Technology Partners IV, closed on $400 million in December 2018. Investcorp did not wish to provide data on the performance of individual deals.

Its technology funds have only booked one loss in 20 years, PEI understands. The 2007-vintage Investcorp Technology Partners III had an internal rate of return of 17.45 percent as of 30 June, according to pension documents.

“We have given our investors the option to invest in India, South-East Asia, China and North America. What we have acquired and added to the business really gives us the foundation to execute to $50 billion. I believe even if we don’t do any more acquisitions, we have enough,” executive chairman Alardhi tells PEI, without necessarily ruling out more acquisitions.

In line with its growing AUM, Investcorp took several steps to institutionalise its investor base. In January the firm closed a GP-led restructuring that brought secondaries firm Coller Capital and a group of co-investors into its investor base. The deal saw six assets, acquired since 2012 on a deal-by-deal basis, packaged into a vehicle named Investcorp European Buyout Fund 2019. The syndicate paid $650 million for the assets and provided $300 million for follow-on investments, creating the first closed-end PE fund to be managed by Investcorp since 2007.

“For a long time they probably didn’t feel the need to utilise institutional capital,” says Hani El Khoury, a principal with Coller. “Having said that, when you have an underwriting model with a balance sheet component, if you want to significantly grow then you have to look at your funding sources. The reality as well is that you have new leadership which really buys into that growth and pushes those type of opportunities harder.”

In spring 2019 Investcorp acquired 100 percent of Mercury Capital Advisors, bringing an extra 50 placement agents onto its distribution platform. The New York-headquartered firm, which has raised funds for Investcorp, was acquired for its ability to help the firm’s “product, pitch and story” appeal more to US institutional investors.

PEI then revealed the firm was exploring fund structures to access US institutional capital and could come to market within the year.

Investcorp is not just focusing on institutions in the US but wants to apply its experience from the Gulf, says Kapoor, who is leading the US push. Whereas in the Gulf, Investcorp’s relationships were formed and maintained through its own sales and investor relations platform, the US is heavily intermediated by broker-dealers and investment advisors. “Many of these financial advisors and registered investment officers are one- or two person outfits, well respected and embedded in their communities,” Kapoor says. “What they lack is the same trusted relationships on the other side in terms of dealing with investment managers like Investcorp. Our primary thrust in the early stages is to establish those kinds of relationships.”

Alardhi describes Investcorp’s strategy as ‘wherever we have gaps, we fill them’. In the near term, this likely means rolling out its US-focused hedge fund strategies to the European market and expanding into different types of credit. The firm will continue to operate its deal-by-deal model alongside its private equity funds.

“In the eighties [being a boutique firm] was a good thing,” says Alardhi. “In 2015, [the time of Investcorp’s strategic review] our investors wanted more than that. India is attractive, China is growing fast, secondaries, tech and real estate have grown and really matured in the United States, Europe and slowly in Asia.”

In Kirdar’s book, he speaks of the desire to build not just a company but an institution in his own lifetime: “An organisation can become an institution only when the founder’s vision and strength of purpose is transferred to… the organisation itself.”

Rapid growth is fraught with risk and the next few years will tell us how much of an institution Investcorp has become. But with backers such as Coller and Mercury, the confidence of Ben-Gacem, Kapoor and Alardhi may well be justified.

Read our Deep Dives on Eurazeo and Neuberger Berman.