Overheated valuations could be driven even higher by increased corporate spending in the wake of the US Tax Cuts and Jobs Act.

The bill introduced a hefty reduction in corporate tax to 21 percent from 35 percent and a 15.5 percent one-time charge on profit gathered overseas, meaning businesses will be able to repatriate cash without paying additional taxes. Fortune 500 corporations were avoiding up to $767 billion in US taxes by holding more than $2.6 trillion of “permanently reinvested” profits offshore as of March 2017, according to the Institute of Taxation and Economic Policy.

“We’ve had many US strategic buyer clients that had multiple hundreds of millions of euros that they couldn’t repatriate without consequences and were therefore more inclined to acquire in Europe,” Michael Lindemann, managing director at investment bank Baird told Private Equity International. “It now becomes easier for US international corporates with significant cash overseas to repatriate to the US and then acquire there.”

Apple, Microsoft and Citigroup are among the largest corporates that could benefit from the bill, holding approximately $230.2 billion, $124 billion and $47 billion in unrepatriated income respectively as of March, according to ITEP. The US biopharmaceutical sector in particular could see an influx of capital to spend, with giants Gilead Sciences and Amgen holding $37.6 billion and $36.6 billion overseas respectively.

“Now the government’s said you can’t avoid US tax forever by deferring profits offshore. You have, in effect, a worldwide minimum tax; the so-called GILTI [global intangible low-taxed income] which is taxed at 10.5 percent. Will US companies be as interested in foreign assets now?”

Valuations have been increasing amid a mountain of private equity dry powder. US buyout value grew 9.6 percent to $195.6 billion last year as stiff competition for high-quality assets drove valuations to a record 11.2 times average EBITDA purchase price multiple for US LBO transactions, according to Bain & Company’s Global Private Equity Report 2018.

“[Strategics are] in a position where the US stock market is at a high valuation level so, although buying back stock is still a priority, it becomes less attractive,” Lindemann noted.

“That leaves them with two places to deploy that capital: investment back in the company or in M&A. The public market continues to reward M&A activity, so we feel like a lot of that repatriated capital and increased cash positions for US public companies will be deployed to [that].”

Asset prices are likely to rise even higher due to greater post-tax profits from potential targets, Hillier added. “The sellers are going to realise the benefits that buyers are going to get from this.”

LPs are already concerned about what overheating means for deployment. One pension manager told PEI in March that it was having frank discussions with its GPs regarding their investment pace. This pressure to deploy means some GPs will end up paying high prices for assets.

“If you look at the past two or three years, asset prices have continually crept up and people seem to have gotten used to that globally,” Lindemann said. “PE firms have gotten used to the fact that returns may have ticked down a bit, but that’s what they need to pay to deploy their capital.”

When one door closes

A renewed focus on US targets does not spell the end of overseas competition for European assets. Lindemann pointed to the Committee on Foreign Investment in the United States review, which evaluates whether such deals could threaten national security, as a potential obstacle that could drive overseas buyers elsewhere.

Around 90 percent of Chinese investors believe their domestic peers will increase their activity in Europe over the next five years, according to an Invest Europe survey from November. 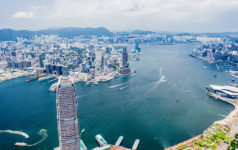 HK could become ‘one of the most competitive’ on carried interest