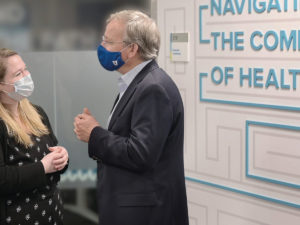 Back in 2016, Clayton, Dubilier & Rice and Ravi Sachdev, a partner on the firm’s healthcare team, spotted an opportunity to build a healthcare company that focuses on improving outcomes for senior patients through a value-based rather than traditional fee-for-service model. To bring this vision to life, CD&R invested $162 million to create agilon health through the acquisition and combination of Primary Provider Management Company and Cyber-Pro Systems. In April 2017, it executed a $60 million follow-on investment to support a strategic partnership with Central Ohio Primary Care.

With Sachdev at the helm as vice-chairman of the board and Ron Williams, a CD&R operating adviser and former chairman and CEO of Aetna, serving as chairman, CD&R set out to build value through four key initiatives.

First, it drew on its partnership with Central Ohio Primary Care to refine its technology and clinical services partnership model. The next step was to roll out and scale its model by entering new markets across the US and launching new partnerships with independent physician groups. With CD&R’s backing, agilon health then leveraged growth opportunities in established markets, for example, it expanded further into Ohio through a new partnership in the city of Akron.

In April 2021, agilon health listed on the New York Stock Exchange at $23 per share, with the share price closing at $31 on the day of its market debut. CD&R’s efforts are understood to have resulted in a 43x gross multiple on investment, based on the closing share price as of 21 June 2021.

The judges commended CD&R’s “impressive focus on building the right management team and arming them with the capital and support to execute”, as well as its vision to combine two companies to create a “new type of healthcare company”. The focus on continuous improvement, growing agilon health’s footprint and ensuring it was in the best position to IPO also stood out to the judging panel.