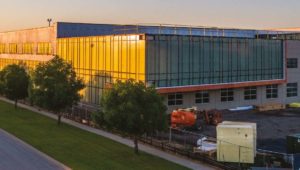 In 2019, EQT acquired a majority interest in biotechnology company Aldevron for a total enterprise value of $3.4 billion. Over the next two years, the US-headquartered business would undergo a substantial transformation from a plasmid DNA supplier to a scalable manufacturer of critical input materials for genomic medicine.

At the time of the acquisition, Aldevron had outgrown many of its existing IT systems and processes. During EQT’s ownership, Aldevron implemented a new enterprise resource planning system and significantly overhauled its finance, legal and quality processes. These operational improvements were critical in enabling the company to continue to scale.

To position the business for further growth, a new manufacturing facility was constructed in North Dakota (pictured). According to EQT, this facility was the largest GMP-grade plasmid DNA facility in the world at the time of its opening in May 2021.

The company also launched an mRNA manufacturing service and boosted investments in its protein manufacturing capabilities. At the time of EQT’s exit, around 30 percent of revenues had originated from the part of the business concerned with proteins and mRNA-related therapies.

Interest in mRNA technologies soared in 2020, as countries around the world looked for solutions to the covid-19 pandemic. Aldevron helped contribute to efforts to combat the virus, partnering with Moderna to manufacture critical raw materials used to produce mRNA vaccines.

Talent was also key to the value-creation strategy. EQT assisted Aldevron in recruiting a new CEO when the company’s founder transitioned to an executive chairman role, and broadened out its management team through the appointment of a new chief financial officer, chief commercial officer and general counsel, among other positions.

As a result of these growth initiatives, Aldevron’s revenues increased by around 113 percent, EBITDA rose by 88 percent, and employee numbers grew from about 385 to more than 650 during EQT’s investment period.

The judges recognised EQT’s success in achieving significant “improvement in revenue, margins and EBITDA” within a short timeframe, and for “transforming Aldevron into a scalable manufacturer of critical inputs for genomic medicine” through its investment in the business. The panel also commented on the company’s “very valuable” role during the pandemic.