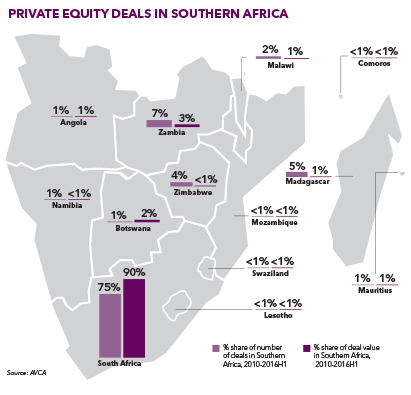 SOUTHERN AFRICA
There’s been some “re-balancing” going on in the continent, with some dealflow moving beyond the traditional PE markets such as South Africa, says Enitan Obasanjo-Adeleye, head of research at the African Private Equity and Venture Capital Association. South Africa, traditionally the dominant force in African private equity, has been beset by political uncertainty and currency problems, encouraging investors to look elsewhere. Deal value in Southern Africa fell from $614 million in 2015 to $428 million in 2016, according to EMPEA.

KEY SECTORS: Healthcare is emerging as a key sector boosted by rapid urbanisation. Financials, industrials plus the consumer-driven sectors remain strong in more mature markets such as South Africa.

LANDMARK DEALS: Madagascar, Mauritius and Mozambique are all seeing deals. Examples include Mauritius-headquartered private equity firm Adenia Partners’ deal in May to take an undisclosed stake in Opham, a pharmaceutical products wholesaler in Madagascar, in the latest deal for its €96 million Fund III.

FUTURE PROSPECTS: “South Africa continues to experience volatility and uncertainty with the macro-climate and increasing political uncertainty. So that has certainly affected the perception and in some degree the performance, but it has also created buying opportunities. Some transactions that would never have been available under more ideal circumstances have come on the market,” says Obasanjo-Adeleye.

Investec Private Equity sold a majority stake in CMC Networks, Africa’s largest managed connectivity provider, to the Carlyle Group for more than $100m in February 2017. In a statement, CMC founder Grant Walker said the company would use Carlyle’s investment to accelerate growth and ”leverage the benefits” of a global partnership. ”Carlyle’s global presence, extensive portfolio and specialist expertise in this sector will bring additional benefits in all areas of our targeted and strategic expansion plans,” he said. CMC was the seventh investment from Carlyle’s Sub-Saharan Africa Fund, which closed significantly above its $500 million target on $698 million in April 2014. 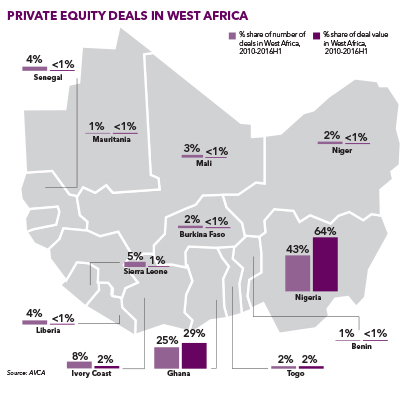 WEST AFRICA
Long regarded as one of the regions set to gain from Africa’s private equity fundraising boom, West Africa’s share of deal value has risen steadily from 9 percent in 2007-10 to 22 percent in 2016. “Currency volatility is the elephant in the room is Nigeria,” says Jeff Schlapinski, director of research at EMPEA. But the economic woes of the region’s traditional powerhouse are “presenting opportunities to find attractive valuations”, says AVCA’s Enitan Obasanjo-Adeleye, citing 8 Miles’ 2016 investment in Nigerian biscuit manufacturer Beloxxi. Francophone countries the Ivory Coast, Mali and Senegal have been helped by the fact they have a common currency pegged to the euro, she says.

KEY SECTORS: Financials, industrials and consumer sectors traditionally make up the bulk of the exits but infrastructure and utility deals are growing.

RISING STARS: “Cote d’Ivoire is growing at about 8 percent per year, it’s one of the fastest growing economies in the world,” says Andrew Brown, chief investment officer at Emerging Capital Partners. “That’s a market that we’ve been [in] for a long time [and] we’ve got a lot of investments already.”

FUTURE PROSPECTS: Nigeria tends to polarise opinions, says Schlapinski, but there is cautious optimism that the worst may be over after the devaluation in 2016. “Nigeria is starting to come out of recession,” says Brown. “I think 2016 will have been negative growth [but] I think we’re expecting to see some level of growth return probably this year.”

Pan-Africa investor Emerging Capital Partners sold its stake in C-Re Holding, the parent company to Nigeria-listed Continental Reinsurance, in 2015 to Saham Finances, the insurance arm of Africa’s Saham Group. Under ECP’s ownership, Continental Re grew to become a leading Pan-African reinsurer operating across the continent, with revenues increasing four or five times during the holding period. The investment was made through ECP’s second fund, a $523 million vehicle launched in 2005. 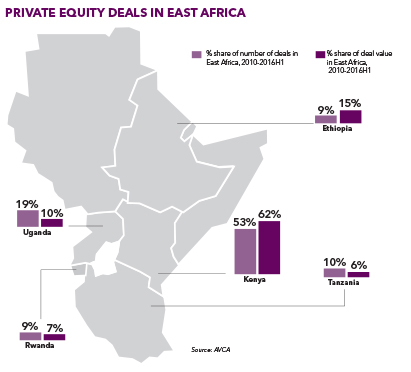 EAST AFRICA
East Africa is the fastest expanding region for private equity with 19 percent of deal value in 2016. That’s up from 11 percent in 2015 and under 5 percent in 2007-10. “The region also boasts three of the fastest growing economies in the world – Ethiopia, Kenya and Tanzania – which all had GDP growth of over 5 percent in 2016 and have strong growth projected for 2017,” says AVCA’s Enitan Obasanjo-Adeleye.

KEY SECTORS: Consumer and financials, but the region is starting to emerge as a tech hub. There’s also a growing emphasis on infrastructure and energy deals, says EMPEA’s Jeff Schlapinski.

GROWTH AREAS: Kenya is still the dominant force with around half of the private equity activity but Ethiopia and Tanzania are starting to emerge with a fifth of all private equity activity, says Obasanjo-Adeleye: “East Africa is less dependent on commodity prices and has benefitted from the fall in oil prices.”

FUTURE PROSPECTS: Of all the regions in the continent, East Africa is regarded as having some of the best growth prospects. “There’s a lot of talent in West Africa and especially Nigeria, but at the moment East Africa is probably proving to be more popular from an investment perspective. Ethiopia and Kenya in particular are attractive for both small and larger funds,” says Edward King, partner at McLean Partnership.

Actis’s investment in Uganda’s electricity distribution company, Umeme, in 2005 was the first time the firm had invested in a distribution company and became one of its most successful ever investments. It hand-picked a new management team and invested heavily in replacing the 20,000km pole network, upgrading them all to the latest safety standards.The company launched its IPO on the Ugandan stock exchange in 2012 and shortly thereafter cross listed onto the Kenyan market, selling its last stake in the business in 2016. 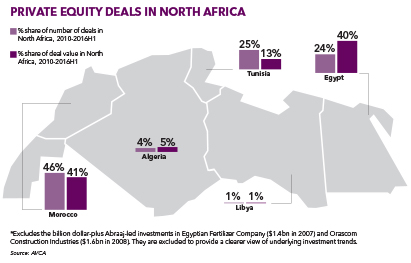 NORTH AFRICA
Private equity activity in North Africa has remained strong fuelled by the perception of returning stability post Arab Spring. North Africa’s share of deal value rose to 42 percent in 2016, up from 38 percent in 2015, according to EMPEA data, with Egypt, Morocco and Tunisia accounting for more than 90 percent of deals. North Africa’s share of exits has risen gradually over the last decade, with the region accounting for 25 percent of the continent’s exits in 2016.

KEY SECTORS: Industrials, consumer and healthcare, backed by links to Europe and a well-established middle class.

LANDMARK DEALS: Development Partners International’s acquisition of a stake in Général Emballage, the leading packaging business in Algeria, from AfricInvest in September 2016 demonstrates the growing importance of secondary buyouts: “PE to PE deals are increasing on the continent,” says AVCA’s Enitan Obasanjo-Adeleye.

GROWTH AREAS: “Morocco is an attractive destination for PE investors because it is relatively stable with a well-established middle class,” says Obasanjo-Adeleye. That has driven deals in the healthcare and education sectors, with both Actis and Development Partners International acquiring universities in Morocco in the last three years.

FUTURE PROSPECTS: Egypt’s currency problems have been the one major recent destabilising factor, but the devaluation following the decision to float the Egyptian pound freely last November has at last removed one of the biggest uncertainties: “There is greater visibility in the exchange rate, and so businesses can make plans – how they will buy raw materials, how they will buy a new production line – and they can price their product,” Hossam Abou Moussa, a partner in Actis’s Cairo office, told PEI.

Mediterrania Capital Partners sold CEPRO, a manufacturer and distributor of disposable baby diapers and sanitary pads based in Algeria, to The Abraaj Group in January 2016 in a deal that generated a double-digit internal rate of return for the firm’s investors. Mediterrania had acquired a significant minority stake in the business in 2009 using capital from its €63 million first fund. During Mediterrania’s holding period CEPRO grew its annual revenue by 580 percent, from €10 million in 2009 to €58 million as at December 2015. Annual sales of baby diapers increased by 400 percent to 600 million sold in 2015.