This article is sponsored by Thrive

The future is the convergence of science and technology

With almost another full year of covid-19 restrictions in the books, there is hardly a pundit who has not called upon us to rethink the future. It’s no longer difficult to see that the future is being shaped by new and exponential advances in technology and science. Virtual everything and connected devices have moved most of us comfortably beyond the realm of the internet and onto our Peloton. At the same time, it has compelled the march of a new generation into the metaverse. Our routines, relationships and fundamental concepts of identity, ownership and authenticity are being redefined and reconstructed.

The influence and progression of technology is not, however, limited to the digital world. It’s also moved into the molecular. Covid-19 with the use of mRNA vaccines has introduced many of us to the concept of synthetic biology. Technology convergence is changing healthcare through the design and use of new platforms, new materials, and new delivery mechanisms, leading us to a future of personalised care and augmented living. What’s even more interesting is that according to a recent study by the McKinsey Global Institute over half of the potential applications of biotechnology engineering are focused on areas outside of healthcare!

As private market investors, we must focus on how to access this interdisciplinary future and anticipate the nature of the resulting opportunity set, and in doing so we must not overlook the importance of China.

China is leading the next wave of innovation

Nowhere is the future arriving faster than in China. Improved living and education standards across the world, and success stories of entrepreneurs have taken ‘start-up fever’ global and shown the next generation that innovation is borderless (and genderless). What makes China so remarkable, is the pace and scale of innovation-driven change, and the government-led urgency with which it is being pursued. With a shrinking working class, rising wages and increasing debt levels, China no longer looks to rely on the expansion of labour and fixed investment to drive growth. The new economy is expected to pick up the slack.

However, not everyone was convinced. In 2014, Harvard Business Review infamously published “Why China Can’t Innovate”. They were wrong. A few years later China had more unicorns than the US and eight of the 10 technology start-ups with fastest rise to $1 billion valuations came from China. New economy platform companies grew unimpeded and piloted digital applications that transformed commerce and financial payments. By 2020, China had the world’s largest mobile internet base just shy of a billion users; it built the largest EV market; became the largest end market for robotics; amassed 75 percent of the world’s IoT connections; and installed over two thirds of the world’s 5G bases.

Against that backdrop of big data, it is no wonder why Deloitte Consulting concluded China represented the largest potential AI market, estimated at $7 trillion. In the same year, China exceeded US spending in research and development, and outpaced all its western developed market counterparts in patent filings, prompting the US National Science Foundation to concede that the US is no longer the ‘uncontested leader’ in science globally. 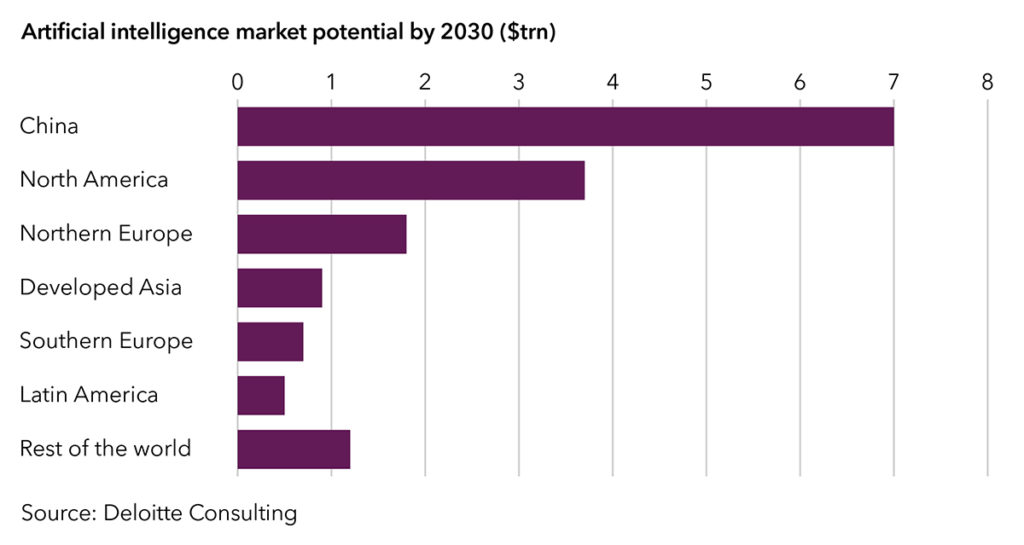 The next wave of innovation is coming even faster. Each generation of technology improves over the next creating an exponential function of change. The greatest economic impact, however, comes from the ability of a society to apply and adopt the innovation horizontally, curating and optimising products and services (and the core technology on which they run) to transform different industries and application areas. In fact, a closer look at Chinese R&D spending reveals more than two-thirds are focused on downstream applications.

As China looks to upgrade areas of the traditional economy in healthcare, energy, transportation, it also seeks to reduce its reliance on foreign inputs and suppliers in response to US sanctions and blacklists. Foreign-educated Chinese STEM talents are returning en masse to build new businesses in China.

Regulation will always be a game of catch-up but China’s rules, while not without critique, are good for the economy and promote sustainable growth. It is important to understand the intentional substance beneath the delivery. Despite the slowdown in USD fundraising for Chinese private equity, local investors see the opportunity and continue to invest at a robust pace. As early as last year, MSA Capital’s Jenny Zeng foreshadowed that attempts at decoupling were good for China PE/VC at CNBC’s East-West Tech Forum.

Last month, China moved a step ahead in issuing a framework for Ethics in Artificial Intelligence. As a result of all these changes, we are seeing a renaissance of innovation in new algorithms, chipset designs and computing technology that are superior for specific end uses and globally competitive. The commercialisation and implementation of these solutions, particularly in the B2B context, will play a major factor in the contribution of productivity to GDP and help close the services gap, which only represents about half of China’s GDP compared with north of 80 percent in the US. This progression has been clear going back to remarks from China’s President Xi Jinping for years (see panel below). 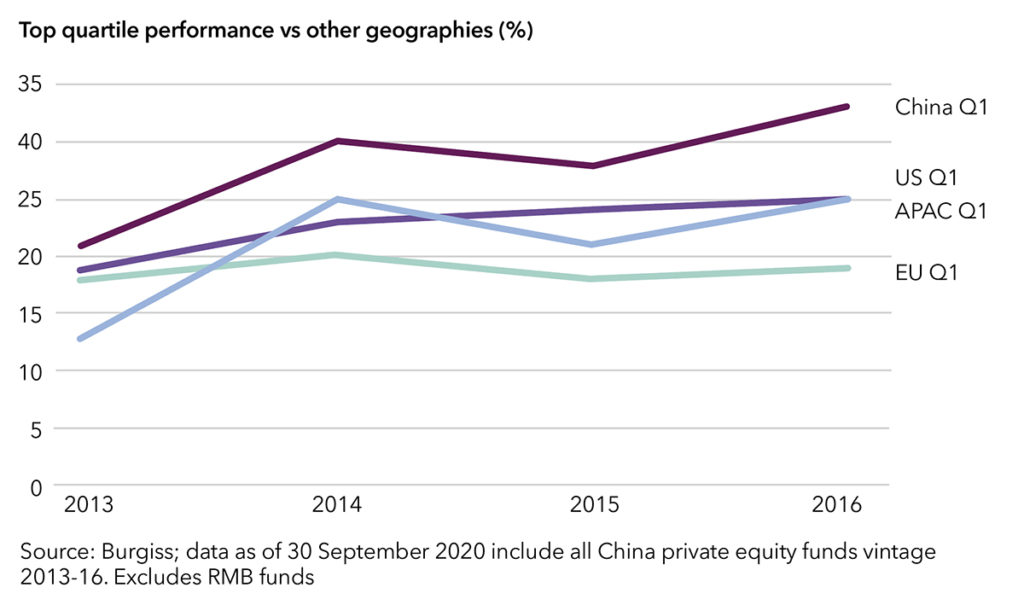 Access to China’s new economy is found overwhelmingly in private equity, where approximately 80 percent of all investments are in venture and growth-stage companies. Since 2013, the year when China implemented its new broadband policy and mobile internet exploded, top quartile China private equity managers have outperformed their US and European private equity counterparts and public market equivalents (PMEs). This is a trend we expect to continue fuelled by globalisation of the innovation economy.

Trade barriers and national security measures between US and China do not mean an unwinding of capital flows, information networks or the global value chain. Chinese stock markets are increasingly institutional and open to international participation. In 2020, the number of Chinese IPOs and capital raised through public markets for new economy companies exceeded that of the US.

Meanwhile, the domestic solutions and import substitutions created by venture-backed Chinese companies are solving problems and creating inspiration for other emerging markets, where they have a cost, speed and legacy-free competitive advantage. As a result, Chinese exports to EM have increased 20-fold and EM is expected to provide a another third of global growth.

As China moves up the innovation curve and the mosaic of the world changes, a global perspective will be required to better assess which companies have a true competitive advantage and which are purely the by-product of government investment and temporary stimulus or regulatory barriers to entry.

The central hand of the government in the changing landscape has also exposed the vulnerability of “China-style” sector funds to market and regulatory shifts. In China, as elsewhere, the best performing funds have been thematic investors that seek to innovate themselves and invest early with a repeatable formula for identifying the next big thing. In a market where 90 percent of the capital went to the 10 largest funds in 2020 and the best-known GPs are managing multiples of AUM compared with prior vintages, there is an exciting opportunity in China to reassess the landscape and identify the next generation of world-class fund managers.

Jackson Chan is CEO and a co-founder of Thrive Alternatives, a private markets advisory firm

Xi Jinping on the innovation economy

We must use internet technologies and new applications to carry out a transformation of traditional industries from all directions; We must promote the convergence of the internet, big data, artificial intelligence and the real economy; and accelerate the digitisation, networking and smartification of manufacturing, agriculture and the services sector.

On the role of regulation

We must foster a fair market environment, strengthen intellectual property rights, and oppose monopolistic and improper competition. We must open green channels for the convergence of basic research and technological innovation and strive to drive breakthroughs in the applied technology community through basic research.

On the impact of interdisciplinary innovation

Cross-cutting fusion between disciplines and technologies, and between the natural sciences and the humanities and social sciences, is becoming more pronounced by the day. Science and technology have never so profoundly influenced the future and fate of nations and the lives and welfare of the people, as they do today.