For investors looking to gain initial exposure to private equity, secondaries can make a lot of sense. The J-curve is significantly mitigated thanks to lower fees and faster cash distributions, and returns are not only robust but there’s usually less dispersion.

“If you are starting a private investment allocation, what’s often most important to CIOs and to the practitioners is that their efforts have a yield that is viable,” says Andrea Auerbach, managing director at Cambridge Associates and co-author of a research note, When Secondaries Should Come First, which argues secondaries make more sense than funds of funds as a starter option for limited partners.

“Secondaries gets your cash back faster, so you could demonstrate success earlier than you could with other strategies.” 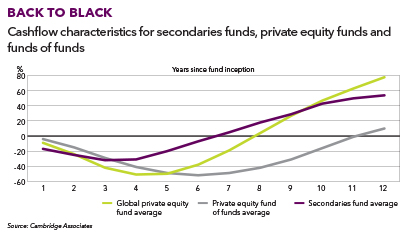 Click for larger view
And these characteristics are not only attractive to CIOs just starting out in private equity; more mature programmes can also benefit from including secondaries.

“It has a faster cashflow element, it’s an ability to capitalise on dislocations in the secondaries market when there are dislocations, buying things at even more of a discount and writing them up,” Auerbach says.

“It does appear to have a mainstay element, especially when you consider the private equity arena just continues to mature and offer these more specialised areas of investment.”

Cambridge data show that the median net return for 2011-vintage secondaries funds was an eye-catching 20.9 percent. This compares to 7.9 percent for funds of funds. The pooled return for US buyout and growth equity funds from 1990-2014 was 13 percent.
But before CIOs think of shifting their entire private equity allocation into secondaries, it’s not quite that simple.

“Let’s be clear, you’re getting a very different source of return with your secondaries fund than you are with your primary fund,” Auerbach says.

“[With a primary fund] your money is out for longer, compounding and returning a return for longer, and for a lot of CIOs and a lot of institutions, especially right now in a low-return environment, the longer your money can be working to generate a compelling return, there’s some value to that.”

What’s more, because secondaries transactions can begin generating distributions as early as day one, initial high IRRs may not tell the full story. Secondaries funds can often write up the assets they acquire, causing a “quick pop” in IRR.

“Your IRRs can start brightly and then start to fade a little bit, whereas private equity and funds of funds build to their return over time,” Auerbach says.
While secondaries funds also outperformed funds of funds in 2011 on net total value to paid-in capital – 1.39x compared with 1.14x – the US buyout and growth equity funds observed between 1990 and 2014 posted a TVPI of 1.6x.

Auerbach also points out that secondaries funds’ return profile goes up and down, influenced heavily by pricing. Secondaries pricing for buyouts in 2011 was 86 percent, compared with 98 percent of net asset value in H1 2017, according to Greenhill Cogent.

“There’s a market cycle to everything, including secondaries, so be wary.”